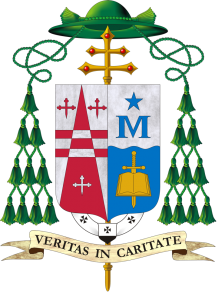 Veritas in Caritate – Truth in Love

Archbishop Etienne’s Motto comes from the Letter of St. Paul to the Ephesians 4:15:

Rather, living the truth in love, we should grow in every way into him who is the head, Christ.

As Church, we believe Christ is the ultimate expression of truth as well as the ultimate expression and experience of love. As one sent by Christ, I ask for his blessing as we, the Church of Seattle, begin this next chapter of faith together. When Christ sent his first disciples, he told them to take nothing with them for the journey. This was because he was to be their sole possession. May we rely only and always upon Christ.

The exterior is the traditional “framing” of a bishop’s coat of arms.  An archbishop’s arms have 10 tassels on each side to represent his office.  The pallium, the symbol of office of a metropolitan archbishop, is displayed below the shield.

As Coadjutor Archbishop, Archbishop Etienne’s coat of arms were not combined with the arms of the archdiocese.  The pallium, as the symbol of office of a metropolitan archbishop also was not present. 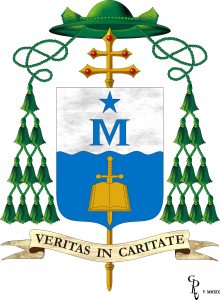 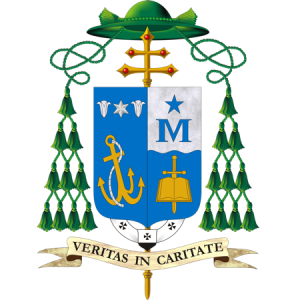 For information on the creation of Archbishop Etienne’s coat of arms as Archbishop of Anchorage, you can read the article in the Catholic Anchor.

Archbishop Etienne’s original coat of arms as Bishop of Cheyenne included a sun, instead of the star, which symbolized Christ, the Dawn from on High, as well as the his general love of the outdoors. 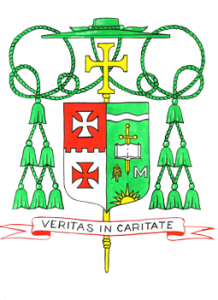