Published by Archbishop Etienne on May 2, 2012

The day began fairly early today.  A very dense and heavy fog made it difficult to see much in the early hours of day.  That would change towards the end of our early morning Mass at the Tomb of St. Peter in St. Peter’s Basilica.  This basilica was built on the very spot where St. Peter was buried after he was martyred in giving his greatest ‘confession’ of faith in Jesus Christ. 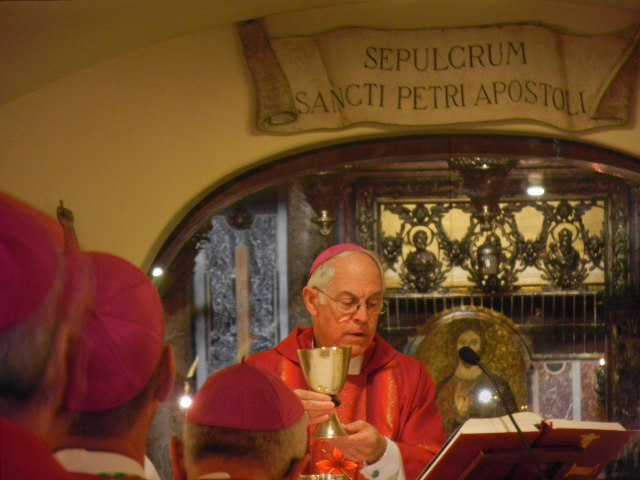 Archbishop Michael Sheehan of Santa Fe celebrates Mass at the altar of the Tomb for the Region XIII Bishops and guests.

The altar where we celebrated Mass is one floor below the main floor of the basilica, and one floor above the actual tomb of St. Peter.  The area directly behind this altar is often mistaken for the burial place, when if fact, this area is a beautifully adorned space representing the ‘confession’ of St. Peter.  Each year on the Feast of Sts. Peter and Paul, newly appointed Archbishops come to Rome for a special ceremony with the Holy Father to receive a highly symbolic piece of vestiture, known as a palium.  These are kept in this ‘niche’ of the basilica.  The palium represents the unity shared between an Archbishop and the Holy Father.

After Communion, the sun broke through the fog, and lit the area behind the altar.  The only access for that light are the windows high above in the main dome of St. Peter’s.  It was very strong symbolism of the Light of Christ that always guides the Church, even in moments of darkness. 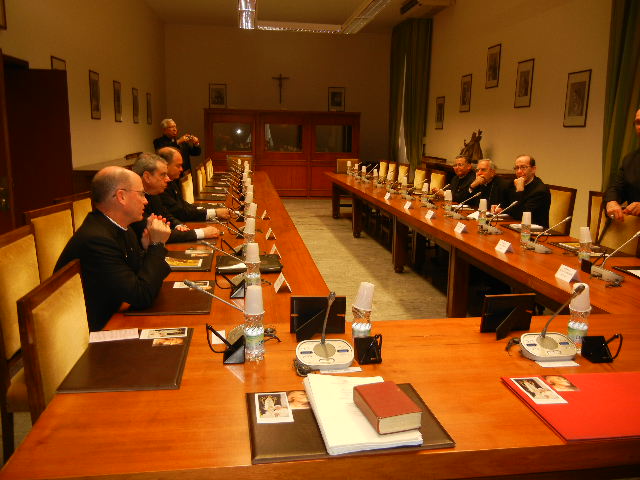 Region XIII Bishops awaiting the arrival of Cardinal Piacenza at the Congregation for Clergy.

After Mass, we began our round of meetings with three different Dicasteries.  First stop was the Congregation for Clergy.  Cardinal Piacenza warmly greeted us, and gave a very moving presentation regarding the role of the Bishop in relation to his priests, deacons and seminarians.  He was very animated and inspiring.  After his remarks, he listened attentively to our questions, and gave direct and beneficial comments.

Following our visit to the Congregation for Clergy, we made our way across Piazza Pio XII to the twin offices where more of the Congregations are found.  We then met with Cardinal Canizares and his staff from the Congregation of Divine Worship and teh Discipline of the Sacraments.  Present as the Secretary of the Congregation was the American Dominican, Archbishop Augustine Di Noia.  This particular meeting for some reason was conducted mostly in Spanish, short of the English interventions of the American bishops present.

This may be a good place to interject that the meetings are conducted in various languages, with simultaneous translations provided.

We concluded the morning with a large contingent from the Institute of Consecrated Life and Societies of Apostolic Life, better known as the Congregation for Religious.  Again, Cardinal Joao Braz De Aviz (from Brazil) and Archbishop Joseph Tobin, CSSR, where quite welcoming.

Each meeting begins with a bishop from our Region serving as a spokesperson to introduce our group and summarize any of the questions and issues we wish to review.  This format works quite nicely for ‘breaking the ice,’ organizing our thoughts ahead of time, and serving as a starting point for a beneficial dialogue in the short time that we have with each Congregation.

That is all for now.  Our group is preparing to depart for another reception this evening with the Ambassador of the United States to the Holy See.