Another Season of Travels Begins

Published by Archbishop Etienne on September 9, 2013

I’m feeling more and more like St. Paul everyday!  No doubt, his travels were more arduous than mine, and his efforts to establish the faith and witness to Christ far more effective.  But travel on behalf of the Gospel and the People of God I do.  I seek his intercession in my ministry as a successor to the apostles regularly!

There was a large group that gathered for prayer throughout the day at Our Lady of Fatima in Casper, while many also lined up to receive the sacrament of reconciliation.  No reports in yet from other parts of the diocese, but it appears many people heard Pope Francis’ plea for prayer.  Let’s keep those prayers for peace coming! 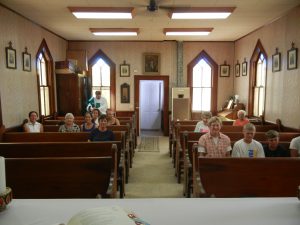 People politely remained after Mass at St. Mary in Clearmont so I could capture this photo. Churches always look better with people inside!

Part of the reason I wanted to be in Casper Saturday was because I was scheduled for a 12:30 Sunday Mass at yet another mission, this time at St. Mary in Clearmont.  This mission is serviced by Fr. Pete Johnson out of Buffalo.  Clearmont is about 25 miles east of Buffalo on Hwy 16, and what a beautiful stretch of country this is.  The area had recently received some good rains, so the fields were lush and the cattle, sheep and horses all looked content.

For the most part, this is a strong ranching area.  Clear Creek runs through this area providing water for the hay operations and livestock.  The landscape, which is mostly along the foothills of the Bighorn Mountains, is dotted with ranches of various sizes.

From Clearmont, I drove along Highways 16 and 14 to Sheridan, where the ladies have gathered from around the state for this year’s Wyoming Catholic Conference of Women’s annual convention.  This year marks the 60th anniversary for the WCCW, and their theme this year is Denim and Diamonds. 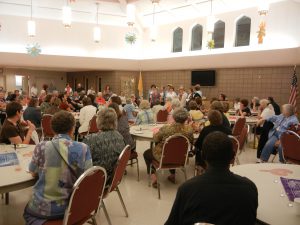 The evening began with a dinner with their board of directors and then quickly transitioned to Holy Name Parish for the stations of the cross followed by a wine and cheese reception for everyone.  There was a great group of singers who provided the evening entertainment and called themselves Just Harmony.  They were quite good and fun to listen to.

This morning, the meeting officially began with a memorial prayer service and the first presentation of this year’s guest speaker, Fr. Dan Cambra, of the Marian Fathers of the Immaculate Conception.  This community was officially appointed in 1992 by Pope John Paul II  to promote and translate the writings of Saint Faustina.  His presentation this morning was very good.  I think the ladies will be in good hands over the coming days.

After Mass with the ladies this morning, I will return to Cheyenne for the Vigil Service for our retired and now deceased friend, Msgr. Eugene Sullivan.  More to follow in this regard later.