Published by Archbishop Etienne on January 25, 2018 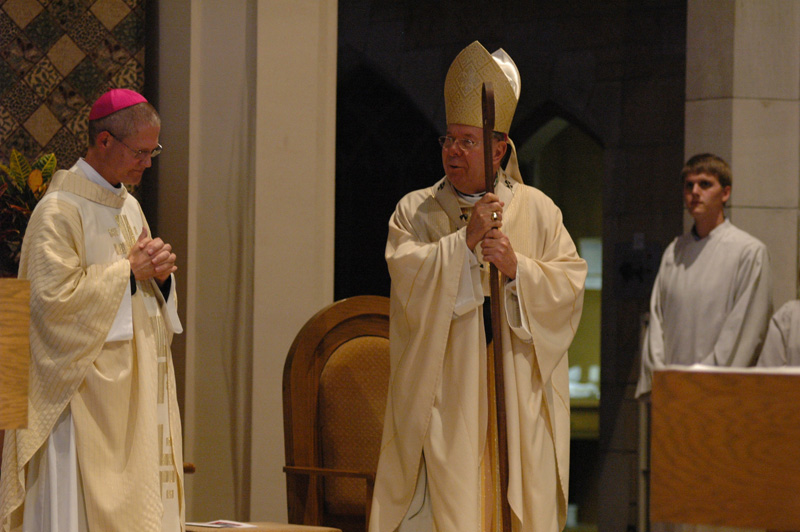 Months before I was named the Eighth Bishop of Cheyenne, I was appointed by Archbishop Buechlein as the Pastor of my home parish, St. Paul in Tell City.

Prior to my departure for Cheyenne, one of the last Masses I celebrated with my home parish was their 150th anniversary.  Archbishop Buechlein presided and I preached. At the end of Mass, before the final blessing, he made some flattering remarks about my appointment.  He spoke of stewardship, of sacrificial giving; that the parish and the Archdiocese were now giving ‘one of our best’ to serve the broader Church.  Then he handed me his crozier, and said: “Here, this is now yours.”

Simple words, small gestures, large impact. These for me capture the the person and only Archbishop I ever served under for 17 years as a priest.

+Daniel was a man of faithful Prayer. He encouraged everyone else to be and do the same. Prayer underpinned all that he did.

Catholic Education was perhaps his greatest passion. He was constantly working to strengthen the core curriculum of schools and doggedly pursued ways to keep the Catholic Schools open in poorer parts of the city of Indianapolis as well as every other part of the Archdiocese.

Stewardship along with regular planning and a clear vision kept the Archdioceses’ mission and ministry clearly focused and well funded.  He knew the vision.  He had the ability to communicate that vision, and he was not bashful about making the ask for support. Once the funding was received, he was transparent about the financial support and how it was used.  For these reasons people continually supported him and more importantly, the ministries of the Church.

One area where I worked closely with him was Vocations.  This was another area he was not afraid to ask for young people to consider what God was asking of them, and where Jesus was leading them.  He longed to start a house of formation, and once that was done, he advanced towards the dream of establishing a college seminary.  Bishop Simon Brute College Seminary may well be one of the lasting legacies of Archbishop Buechlein’s tenure. It may well prove to be one of his gifts that will continue to give back to the Archdiocese for generations to come.

Finally, +Daniel was a Benedictine. His religious training and formation remained at his core all his days, and it seems fitting that he was able to spend his final years back at St. Meinrad.