Published by Archbishop Etienne on April 30, 2011 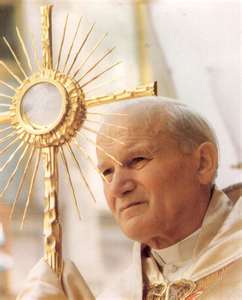 As much as I enjoyed working the 1987 Papal visit, and working as a newly ordained priest escorting the Papal Party during the 1993 World Youth Day, there are significant aspects of John Paul II’s life and ministry I admired.

First and foremost, I truly appreciated Pope John Paul II’s teaching.  Probably the first teaching I really studied in depth was his Theology of the Body.  In an era such as ours that is highly “sexualized”, his clarity on the gift of human sexuality and its proper role in marriage was deeply needed.  One of the core elements of his teaching had to do with human dignity, and this is central to his teaching of Theology of the Body.

Pope John Paul II also had a wealth of teaching contained in his many homilies, encyclicals and letters which speaks to human dignity and the sanctity of life.  He was one of the major writers of segments in the documents of Vatican II which teach these elements.  No doubt, his own experience of living in and preaching in a communist state helped to forge these strong themes of his papacy.  He clearly loved God and God’s people, and thus saw how essential it is for all of us to come to know the Truth, Jesus Christ, and the critical role He plays in the dignity and sanctity of each person.

John Paul II had a sharp mind and an unerring compass when it came to morals.  He was the model “evangelist”, and preaching the Gosepl was his mission.  He had a unique gift for this precious work and the gifts that opened hearts to him.  I observed first hand in Australia, LA, New Orleans and in Denver how the youth were absolutely fascinated by Pope John Paul II.  What else can explain this other than John Paul II fed their thirst for the Truth?

Blessed John Paul II left a legacy through his papacy, and a treasure in His writings and teachings.  Above all, he taught the world we have nothing to fear in any circumstance, if we can learn to live only and all for Jesus Christ.  This is the hallmark of sanctity, to be marked significantly and profoundly, once and for all for Christ.  On Sunday, the Church will thank God for the gift of John Paul II.  I join my voice of gratitude to the multitude for the inspiration and hope Blessed John Paul II brought to the Church, and personally, to my life.