Published by Archbishop Etienne on April 27, 2011 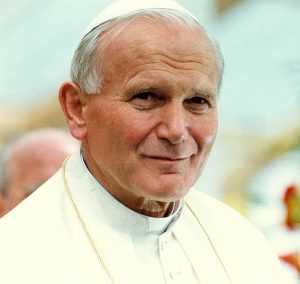 After what I thought was a once in a lifetime experience, working the 1987 Papal Visit, there were other opportunities to be in the presence of this holy man.  In fact, I’m sure his courage, prayerfulness and inspiring presence had something to do with my own decision to go back to the seminary in the Fall of 1988.

When the “new men” arrive at the North American College Seminary in Rome, one of the many events planned is a Mass with the Pope in the crypt of St. Peters at the Christo Re altar.  This is one of the few times the glass doors in front of the “Confession of St. Peter” are open…when the Pope is present.  After Mass that morning, the Holy Father remained in a side hall way to greet each seminarian.

It was quite profound to be in this space, near where St. Peter was martyrd and buried, with the successor of “Peter” just around the corner from me, with the light of a new day shining directly into this sacred space.  It was as if God were telling me: “This is where you are supposed to be.  I want you to be a priest.”  By this time, several of my classmates had wandered in behind me, so I got in line for “another handshake”.  There were to be several more moments to meet Pope John Paul II as a seminarian.