Care For Creation In Solidarity With Native Peoples

Published by Archbishop Etienne on November 4, 2022 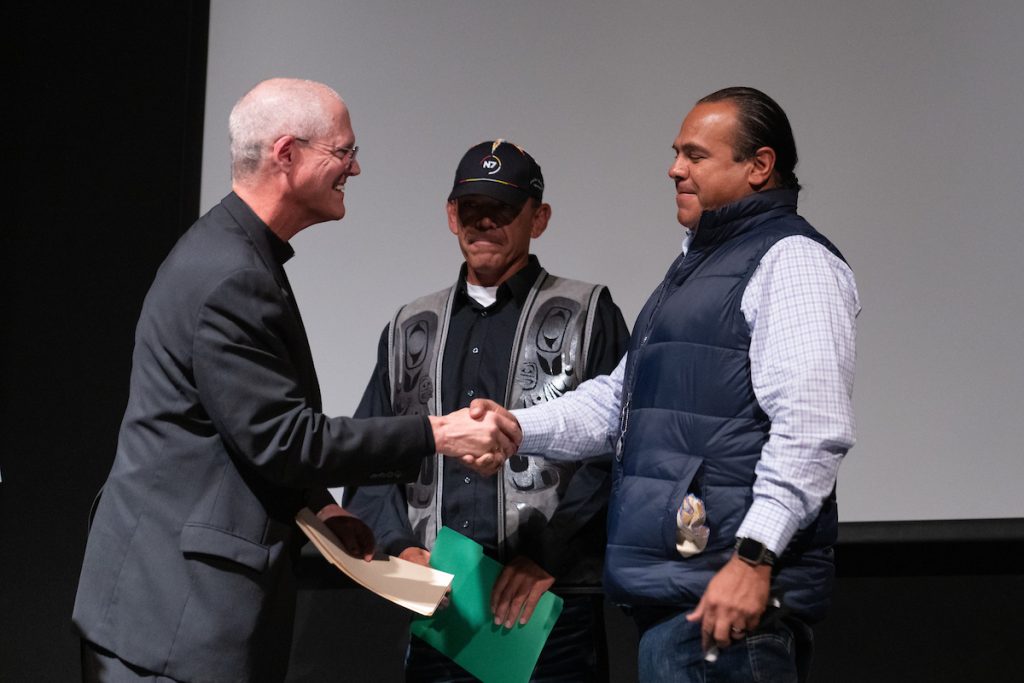 Sunday evening I had a delightful experience attending and addressing the Salmon Peoples at the International Indigenous Salmon Seas Symposium at Woodland Park Zoo in Seattle. This was a gathering of Native peoples from the Salish Sea, Alaska, and Russian Far East. This was a concluding event of a symposium covering several days in which these people came together to invoke in a good and constructive way a new era of collaboration and communication among the Salmon People of the Pan Pacific.

The organization who hosted the symposium is called Se’ Si’ Le. They define their purpose and mission in the following words:

Se’Si’Le (saw-see-lah) is the Lummi language term for our grandmother. Respect for elders is central to Native life: to acknowledge Grandmother Earth is to invoke ancestral and cultural power. Founded by Lummi tribal member Jay Julius, Se’Si’Le reintroduces Indigenous spiritual law into the mainstream conversation about climate change and the environment. 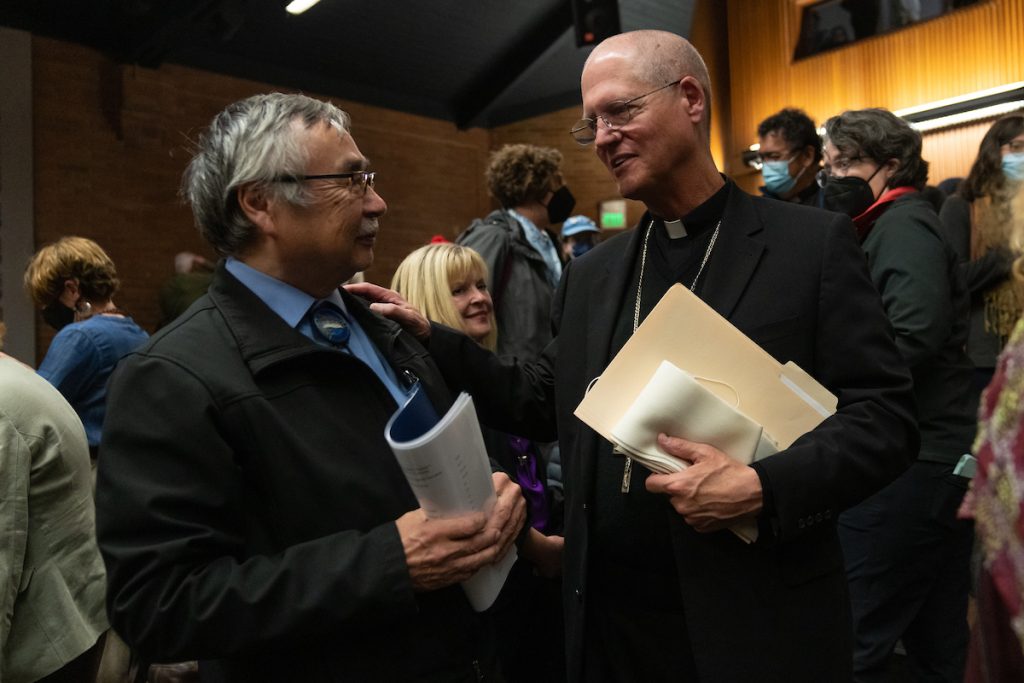 Never-the-less, these people have a profound respect for nature, which I share. I have only had a few brief moments to be with a small representation of the local Native leaders, but I am humbled by their dedication to their people, culture, spirituality and pursuit of their sovereign identity and independence. I look forward to further strengthening those relationships.

In recent months, members of the Se’ Si’ Le organization asked the Washington State Bishops to join with them in expressing our concern for the health of the waterways that are essential to the preservation and restoration of wild salmon. In recent decades due to pollution, population growth, loss of habitat, and global warming we have witnessed up to a 90% loss of the wild salmon. That is substantial!

Sunday evening I was pleased to read the statement developed by the Washington State Catholic Conference expressing our support for a healthier Lower Snake River, one of the many vital waterways in the salmon ecosystem. You can read the statement below:

Saint Francis, faithful to Scripture, invites us to see nature as a magnificent book in which God speaks to us and grants us a glimpse of his infinite beauty and goodness. “Through the greatness and the beauty of creatures one comes to know by analogy their maker” (Wis 13:5); indeed, “his eternal power and divinity have been made known through his works since the creation of the world” (Rom 1:20). (12)

The urgent challenge to protect our common home includes a concern to bring the whole human family together to seek a sustainable integral development, for we know that things can change . . . Humanity still has the ability to work together in building our common home. (13)

Pope Francis reminds us that through the greatness of creation we can become closer to God.  Additionally, we are all called to be stewards of God’s creation and to come together to care for our common home. Collaboration on innovative, holistic, and sustainable solutions is a timely, moral imperative that Catholics around the world are addressing through the Laudato Si’Action Platform.

In the Lower Snake River region, we are also called to come together to care for our common home. A serious decline in salmon, a keystone species, is an indicator of environmental damage. Southern Resident orcas are also increasingly endangered as their food source diminishes. In response, we urge federal and state policymakers to care for creation, address the loss of biodiversity, and ensure the Lower Snake River ecosystem and its neighboring communities are able to thrive.

A comprehensive plan developed with the input of affected communities is needed to address the health of the Lower Snake River and the decline of species in the region. In taking action to care for God’s creation, we urge policy makers to respect the dignity of every human person and serve the common good, two important pillars of the teachings of the Catholic Church.

In respecting the dignity of every human person, we first consider the Original Peoples of Washington state. Native American tribes of the region have a long-standing relationship of care and respect for the salmon of the Lower Snake River. We acknowledge that the decline of salmon and loss of their original habitat poses a threat to the spiritual lifeways of the Original Peoples of the Northwest. In response to requests for solidarity with Indigenous leaders, we recognize that deliberate action is necessary to find ways to restore the health of the salmon of the region.

Pope Francis emphasizes the importance of consulting with Indigenous peoples and highlights the sacred relationship many Native communities have with the environment in Laudato Si’:

. . . it is essential to show special care for Indigenous communities and their cultural traditions. They are not merely one minority among others, but should be the principal dialogue partners, especially when large projects affecting their land are proposed. For them, land is not a commodity but rather a gift from God and from their ancestors who rest there, a sacred space with which they need to interact if they are to maintain their identity and values. (145-146)

We must all come together to care for our common home. We urge federal and state policy makers to develop and implement a holistic plan for the Lower Snake River region that seeks input from the Original Peoples of Washington state as principal dialogue partners, as well as input from farmers, community members, and concerned citizens. Any policy changes should carefully consider those who may be negatively impacted. Ultimately, we pray for a plan that serves the common good, taking into account care for God’s creation, treaties and rights of the Original Peoples of Washington state, and those who live and work in the Lower Snake River region.

In the heart of Christ,

Signed by the five Bishops of Washington State