Published by Archbishop Etienne on April 29, 2014

This colloquium was held at Stanford University on Friday, April  25, 2014.  The event was hosted by the Hoover Institution at Stanford University, Menlo Park, California, and sponsored by the University of Notre Dame, the Kroc Institute for International Peace Studies, the Committee on International Justice and Peace of the USCCB, the Berkley Center for Religion, Peace, and World Affairs of Georgetown University and Boston College, and the Nuclear Threat Initiative.

The colloquium gathered statesmen, policy makers, ethicists, theologians, students and Bishops with the express goal of defining the present state of the world affairs, and the role of nuclear deterrence, while at the same time raising new ethical and moral issues in order to help define new paths that can lead to a world with less reliance on nuclear deterrence and assurance that nuclear weapons are never used.
Clearly, the Cold War is well behind us, yet nuclear weapons still pose a threat to humanity and civilization as a whole. The world has changed since the Cold War, with terrorist organizations and regional tensions being perhaps the greatest new factor in world affairs that threaten peace and the use of nuclear weapons. After a time of reduced nuclear weapons and states that possess them, we are seeing once again the list of states with nuclear weapons expanding. 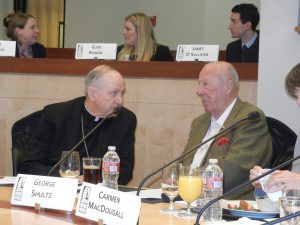 As mentioned above, one of the organizers of this symposium is a group known as the Nuclear Security Project. This alliance is made up of four senior U.S. statesmen with strong credentials in national security; former Secretary of State George P. Schultz, former Defense Secretary William J. Perry (both present for this colloquium,) former Secretary of State Henry A. Kissinger, and former Senator Sam Nunn. Their background in national security and their bi-partisan concern gives credence to strengthen the commitment of the international community to renew our efforts to contain the proliferation of nuclear weapons and material and our reliance upon nuclear deterrence.
A statement by Scott Sagan of Stanford University in The National Interest (September/October 2010) summarizes the present challenge:

“The choice we face is not between a nuclear-free world or a return to bipolar Cold War deterrence; it is between creating a nuclear-weapons-free world or living in a world with many more nuclear weapons states. And if there are more nuclear nations, and more atomic weapons in global arsenals, there will be more opportunities for terrorists to steal or buy the bomb.”

If this assessment is correct, it makes sense that efforts to reduce nuclear weapons (and the continued practice of nuclear deterrence) are important in making progress of halting proliferation if not someday a nuclear free world.
From the perspective of Church teaching, every person and nation has a right to self-defense. However, responses to aggression may not exceed the nature of the aggression. (The Challenge of Peace, #103) Responses must be both discriminate and proportionate.

Protecting the lives of innocent persons must always be considered in times of war and all activities of war. The other side of this consideration is that killing innocent people and populations is always morally unacceptable. Proportionality means that any military advantage gained from an action must be weighed against the harm and destruction the same action will cause.
In his 1982 address to a special session of the United Nations, Pope John Paul II said:

“In current conditions ‘deterrence’ based on balance certainly not as an end in itself but as a step on the way toward a progressive disarmament, may still be judged morally acceptable. Nonetheless in order to ensure peace, it is indispensable not to be satisfied with this minimum which is always susceptible to the real danger of explosion.”

The bishops’ 1983 Pastoral Letter, The Challenge of Peace: God’s Promise and Our Response, also gave conditional moral approval to the practice of the time of deterrence. The conditions of that moral approval now thirty plus years later seem to indicate that we have reached a point in time where steps must be taken to move towards a nuclear free world.
Mr. Gerald Powers of the Kroc Institute of Notre Dame summarized these conditions in a May 17, 2010 article in America Magazine:

“In their 1983 peace pastoral, … the bishops proposed an ‘interim ethic’ whereby nuclear deterrence could be morally acceptable under three conditions: 1) if it is limited to deterring the use of nuclear weapons and not expanded to include nuclear-war fighting strategies or using nuclear weapons to deter against nonnuclear threats … 2) if the goal is to have enough weapons only to deter nuclear use, not to achieve nuclear superiority … ; and 3) if deterrence is used as a step toward progressive disarmament.”

It is fair to say that any progress made in past decades towards disarmament has stalled at best. Is it possible to continue to morally justify today’s continued policy of nuclear deterrence with little effort being made to promote non-proliferation and disarmament? When did the world community get comfortable living with weapons that have the potential to destroy human existence?
After the colloquium, this passage came to mind, particularly in light of the potential that any use of nuclear weapons has to severely alter if not end civilization as we know it. “Thus says the Lord, the creator of the heavens, who is God, the designer and maker of the earth who established it, not as an empty waste did he create it, but designing it to be lived in: I am the Lord, and there is no other.” (Isaiah 45:18)
Any use of nuclear weapons is a direct threat to the beauty of God’s creation and to the human life it is meant to sustain. The destructive potential of nuclear weapons is so great that the very use of such weapons is morally unthinkable. The Holy See made the following 1976 statement before the United Nations: “the arms race is to be condemned as a danger, an act of aggression against the poor, and a folly which does not provide the security it promises.”
The nuclear threat is real, as Secretary George Schultz and the other members of the Nuclear Security Project have clearly stated. “The accelerating spread of nuclear weapons, nuclear know-how, and nuclear material has brought us to a tipping point. We face a very real possibility that the deadliest weapons ever invented could fall into dangerous hands.” (January 19, 2010 op-ed; Wall Street Journal)
I would simply propose that we all continue to keep this topic of nuclear disarmament in our prayers. Let us pray for today’s statesmen and women that they are capable of the kind of diplomacy and negotiations required to diffuse the regional conflicts that can lead to the use of nuclear weapons. Let us pray for today’s policy makers to discover a renewed motivation and commitment to work to address the safety and security issues regarding the handling of all present nuclear weapons and materials, and begin once again to reduce the number of nuclear nations. Let us pray for more and more people to dedicate themselves to being peace builders. Let us pray that the world population may once and for all learn the lesson and wisdom that war does not build peace.
“Blessed are the peacemakers, for they will be called children of God.” (Matthew 5:9)