Finding ‘Self’ in the Divine

Published by Archbishop Etienne on February 20, 2012

The Church pertains to all people, because Christ pertains to all people. (See De Lubac, Catholicism, pp. 48-55)   This statement is about something fundamental to the human person, all people, of all times.  This ‘truth’ is expressed in simple statements found in Mark”s Gospel: Many gathered together so that there was no longer room for them… and he preached the Word to them.  Mark uses a similar statement in the first chapter of his Gospel: When it was evening, after sunset, they brought to him all who were ill or possessed by demons.  The whole town was gathered at the door. Numerous other times in the Gospels we hear of the great crowds that followed Jesus.

The reality of the great human interest in Jesus is no doubt partially about his capacity to perform miracles, or his great oratory skills, or his tremendous insight into the human person.  But this great human interest in Jesus expresses a far greater truth about Who Jesus is as the Son of God, and about the fundamental truth of how the entirety of humanity is born by and in the person of Jesus Christ.

Christ is the image of the Father.  We know this, because in John’s Gospel, Jesus tells Philip: Whoever sees me sees the Father.  We also know from the Book of Genesis that we are created in the image and likeness of God.  This necessarily implies that from the beginning, all humanity is created in the image of Christ.  Henri De Lubac in his work Catholicism; Christ and the Common Destiny of Man, reflects upon these scriptural statements together with the teachings of the early Church Fathers.

For instance, we know that in the Incarnation, the WORD became flesh.  This is how De Lubac views the Incarnation: Christ virtually takes all humanity to himself, from the very beginning of his existence, and bears all humanity within himself.  He comes to this understanding through writings such as St. Cyril of Alexandria who said: “Every man was in Christ Jesus.”  Or St. Hilary’s statement: “Christ became the flesh of our universal humanity.” 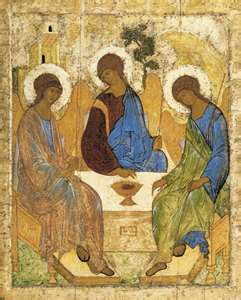 St. Catherine of Sienam’mirrors’ this thinking and theology.  For example, in a Letter to Raymond of Capua (1376) she writes:

So, think, my dearest sons, there is no other way we can see either our dignity or the faults that mar our soul’s beauty, except by going to look into the quiet sea of the divine Being.  There, in that Being, we see our reflection.  Why?  Because we came forth from there when God’s wisdom created us in God’s image and likeness.  There we discover the union of the Word engrafted into our humanity; we discover and see and experience the blazing furnace of his charity, the means by which God gave us to ourselves and later united the Word with us and us with the Word when he took on our human nature.  (Letters, Noffke, Vol. II)

As another Lenten season quickly approaches, may we spend more time prayerfully gazing into the Divine, so as to discover the ‘truth’ of my own self, and a deeper understanding of the human person.  The human person does not define his or her self.  To do so leads to a distorted view of person and personal freedom.  A true understanding of the human person can only be found in proper relationship with God, in the person of Jesus Christ.   Such knowledge of God and knowledge of self are always greatly needed, and our ‘time’ is proving to be no different.