Galilee: The Site of the Majority of Jesus’ Ministry

Published by Archbishop Etienne on April 9, 2015 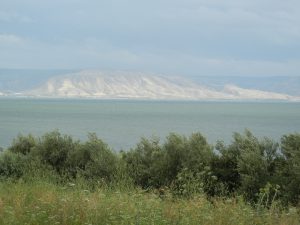 The Sea of Galilee from the NW shore

Wow!  Words cannot express the graces received by our group today on the Sea and shores of Galilee.  As Thursday comes to a close here on the Mount of Beatitudes, our Pilgrimage group has just concluded the day with a prayer service in the Blessed Sacrament chapel.  Most of the members shared specific moments of the day that were graces to them.  Talk about holy ground… it is always a sacred moment when other share their experience of encountering the Lord.

Our day today was spent along the shore and upon the Sea of Galilee.  I never quite realized that Jesus spent almost 85% of his public ministry in this very vicinity of Israel.  The Sea of Galilee is approximately 17 X 8 miles wide, 120 feet deep, containing 27 species of fish.  On the southern shore is the city of Tiberius, a Roman town in the time of Jesus, and today, a resort town with a population of about 70,000.  During the time of Jesus, the Jewish population lived along the northwest shore, in and around the city of Capernaum.  To the East was a gentile community known as the Decapolis.  Jesus worked miracles in each of these areas. 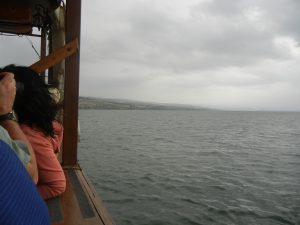 Boat Ride on the Sea of Galilee

Another interesting historical reality regarding the significance of Jesus’ choice of Galilee as the site of his public ministry regards the fact that the Via Maris ran right through Capernaum.  This meant that the major ‘world traffic’ from north to south (Egypt to Iraq) passed through this area.  Many nations lived in and around Galilee, and many nations passed through this major trade route.

The ministry and identity of Jesus would be rejected by many who knew him, but to those who passed through Galilee, they came to believe in him, and would carry their faith in him ‘to the ends of the earth’ as it was known in those days.

The Sea of Galilee is obviously not a “sea” but rather a lake.  However, it claims the title of a ‘sea’ in order to glorify the place for all that happened there years ago when the Son of God came to earth and made his dwelling here.  The northwestern shore of the Sea of Galilee is where Jesus lived most of his public life and appeared to his disciples after the resurrection. 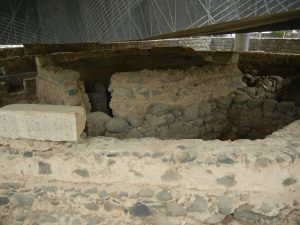 Excavations of St. Peter’s house, beneath the modern day church marking the spot.

Our boat ride dropped us off at the ancient city of Capernaum.  Here is located the house of St. Peter’s mother-in-law, and thus, the house of Peter, where Jesus heals Peter’s mother-in-law.  (Matthew 8:14-15)  Capernaum was a gateway to the pagan world.  It is here that Peter declares that Jesus is the Son of the living God.  The pagans were ready to listen to Jesus. 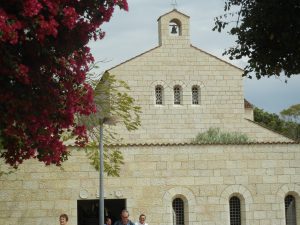 Tabgha: Church of multiplication of five loaves and two fishes

From Capernaum we made our way the short distance to the church of the Multiplication of the five loaves and two fishes, the feeding of the 5,000.  (Matthew 14:13-21) This church is located in a place also known for seven springs.  (Heptapegon)  The rock where this miracle took place is located beneath the altar of the modern day church.

The Byzantine mosaics on the floor of the 4th century church, lost for centuries, were discovered in the 1930’s.  Perhaps the most famous of these is an mosaic of a basket of four loaves (symbolizing that the 5th loaf is placed upon the altar) and two fishes is located on the floor in front of the altar.  Significantly, this is the piece of art represented on the door of the tabernacle in the chapel at the bishop’s residence in Cheyenne.  This was the sight of another specific grace for me today. 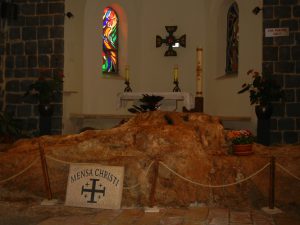 Rock where the Risen Jesus prepared breakfast for the Apostles

Finally, we made our way to another nearby church which represents the Primacy of St. Peter.  This is the location where the Risen Lord appeared to the apostles while they were fishing on the Sea of Galilee.  (John 21: 1-24)  Here, Jesus had that marvelous dialogue of mercy and love with St. Peter: “Peter, do you love me?”  What a joy the apostles experienced to share another intimate moment with their Risen Jesus!  How their hearts leapt to receive a miraculous catch once again at the direction of Jesus.  How overjoyed they were to hear the Risen Jesus call them once again by his special term of endearment; ‘children.’  (John 21:5)  How incredibly joyful they were to share one more meal with the Risen Lord.  John 21: 9-12)  At an outdoor altar at this location, we celebrated a very meaningful Mass.

My dear friends, Jesus is Risen!  Indeed, he is truly Risen!  May the graces we are receive during this pilgrimage and prayer flow from us to all of you.  St. Peter was prominent in our stops today.  He is the rock upon whom Jesus built his Church.  Let us keep Pope Francis in our prayers. 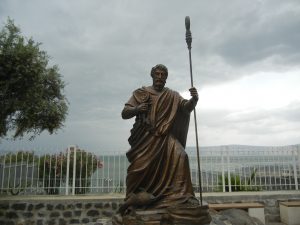