The priesthood, celebrated in its fullness in the episcopacy, is primarily a ministry of love. And, while I would bet that few people in this cathedral tonight ever heard Archbishop Buechlein ever say “I love you,” they never-the-less witnessed such love every day of his life.  The love of the priesthood is an expression of the love of Jesus Christ. And I cannot begin to imagine how many times the name of Jesus fell from the lips of this man whom we commend tonight to God.

The life of the priest and bishop is one that is a constant “Yes” to Jesus and to God’s People.  By making a gift of self, we at the same time discover our fullest potential, because we are asked to do things we might initially think are beyond our capacity.  It is only by setting out into the deep that such self-discovery is possible.  Heaven knows, +Daniel more than once asked me to take on roles that I did not wish to, and at times, I did not feel capable of achieving.  Many times, he asked me to do things that caused me to put my own plans on hold.  I told Fr. Patrick when we were talking about the order of this evening’s prayer service that this will be the last time +Daniel gets to throw a wrench in my plans.

Each priest when he is ordained promises to follow Jesus – wherever he leads, whether to Memphis, or Indianapolis, or even Alaska!  As the Blessed Mother who, through the message of an angel, said “Yes” to God, had to renew her ‘Yes’ every day as the Mother of Jesus, so, too, each priest and bishop must renew their promise to God each day in their service to Jesus Christ, as a Father to his people.

With each new assignment in +Daniel’s life his ‘Yes’ was renewed as he took on greater responsibility – he renewed his trust in God and opened himself to a realm of greater possibilities – tapping resources he did not yet know he possessed.  For him, and each of us, this is how we discover the great things God can do in and through us who make a gift of self to God and to others.  I’m sure these were moments that allowed +Daniel to say with Mary: “God has done great things for me.”

I’m sure Archbishop Daniel had his own curiosity about how and why God ever chose him to become the Bishop of Memphis, and later, the Archbishop of Indianapolis.  He went through his own self-discovery in the eyes of God, while all the while, ‘seeking that Face of the Lord’ whom he served so faithfully.  As with priesthood, so too with the episcopal office.  Though a priest and bishop from the moment of ordination, there is also the matter of growing in grace and confidence.  When I was ordained a bishop, then Bishop Cupich told me: “Paul, it will be five years until you really know what you are doing.”  I found that timeline to be very accurate.  Indianapolis now thanks Memphis for seasoning the bishop that arrived here as the new Archbishop in 1992.

Being a successor to the Apostles is a grace and a privilege, not only because of the responsibility it carries in service to the People of God, but especially because of the unique association with Christ it entails.  Each bishop at some point claims the words of St. Paul as his own: “I, Paul, and apostle of Jesus Christ, by the will of God…”  This is where our true strength resides – in our association with Jesus Christ, and our obedience to the will of God.  +Daniel knew this, and lived deeply in this reality. 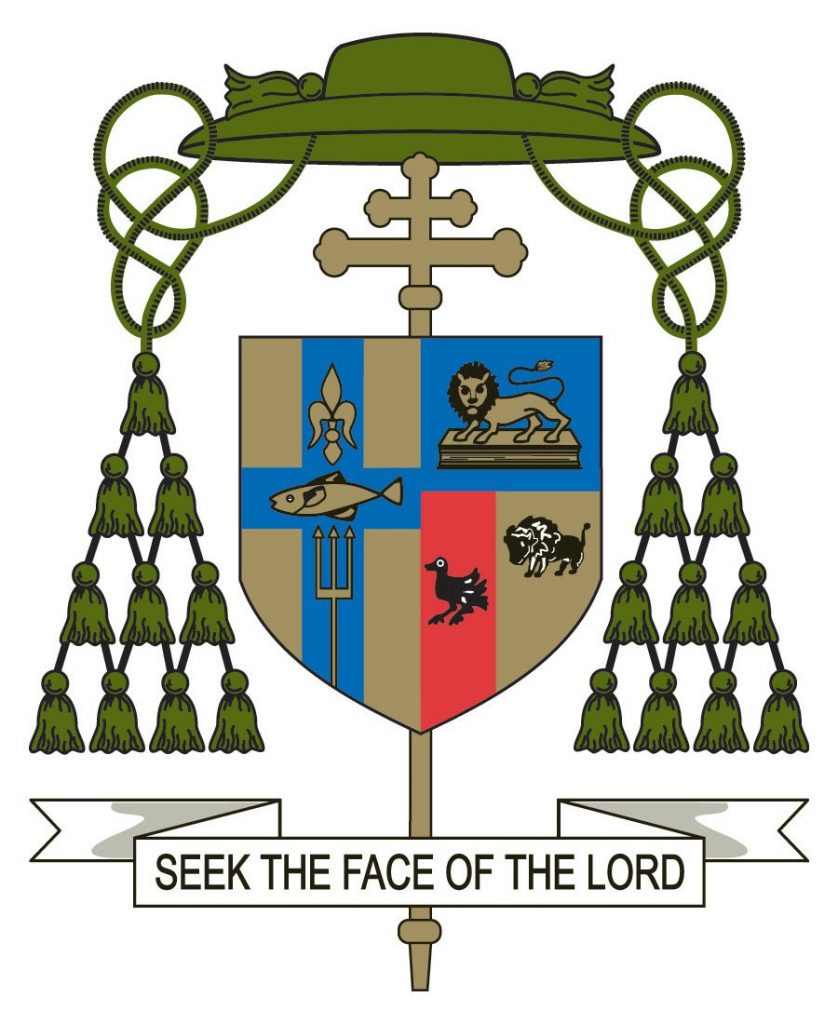 Archbishop Buechlein’s episcopal motto was Seek The Face Of The Lord.  I’m convinced he discovered this was best accomplished when looking over the top of his glasses.  How often did we get ‘that look’ from +Daniel?  I would guess no one got that look more often than Msgr. Schaedel.  Because +Daniel was always so serious, it was easy to catch him off-guard with an off-collar remark.

I think +Daniel needed people at times to help him find the lighter, humorous side of life.  I just heard a great story this week about one of his priests who will remain nameless in this moment, who upon returning from a Spanish immersion program was asked by Archbishop Buechlein if it was difficult to return, answered: “The hardest part was leaving my girlfriend.”  I’m sure that earned one of those looks!

A priest and bishop’s life is best spent immersed in God’s Word.  +Daniel took this role of his ministry quite seriously.  With his Benedictine training and grounding in prayer, he combined the encouragement of Pope John Paull II to emphasize his ministry as teacher.

I always admired and wondered how +Daniel was able week after week to write a column for the Criterion.  It was precisely because of his desire to teach – to teach the faith and Gospel of Jesus Christ.  A life of service to God’s Word, will now allow the Heavenly Father to see the Living Word within +Daniel, and this is what pleases the Father most, seeing His Son in each of us.

During my years as a priest here in this Archdiocese, +Daniel was the only Archbishop I served. We did not have an Archbishop when I was ordained, and once +Daniel was installed a few months later, there was a sense of wholeness that ensued, which was a great lesson regarding the relationship between a priest and his bishop.  When I was named a bishop, our relationship transitioned from Father / Son, to that of Brothers.  My life and ministry was profoundly influenced by Archbishop Buechlein, and I am truly grateful to him.

During my years as a priest, I always looked forward to Archdiocesan celebrations, especially the annual Chrism Mass, because I desired to hear someone else preach, and to receive, rather than give the blessing at the end of Mass.

As pastors, we receive – many times over – a blessing in return for our ministry. But we can often question, especially when we ‘give the blessing’ at the end of the Mass, “Who is blessing us?”  This Archdiocese was blessed in so many ways by Archbishop Buechlein.  Tonight, we give thanks to God for his tremendous fidelity to Christ and service to the People of God of central and southern Indiana.  We give thanks that through is search for the face of the Lord, we experienced the presence of Christ in our midst through his ministry.

Please allow me to close these remarks by recalling the blessing used so often by +Daniel, which comes from the Book of Numbers:

The Lord bless you
and keep you;
25 the Lord make his face shine on you
and be gracious to you;
26 the Lord turn his face toward you
and give you peace.

Tonight, we add to this blessing, a phrase by which +Daniel concluded many a homily: