Published by Archbishop Etienne on December 31, 2022

As the Church mourns the death of Pope Emeritus Benedict XVI, I wish to encourage all of us to remember him in prayer that the Lord may receive his soul and grant him the reward of his generous and exceptional service to the Universal Church.

He was the last Pope who personally participated in the Second Vatican Council. His presence as an expert theologian (peritus) would be a spring board for so much of his theological thought that would follow as a bishop and later as the Prefect for the Congregation of the Faith and finally as the Pope who would follow St. John Paul II.

Perhaps more significantly, Pope Benedict XVI will be remembered as one of the greatest theologians of the 20th century. His writings are inspirational and insightful; broad and profound. From his Pastoral Letters to his great work, Jesus of Nazareth, he was clearly a man of prayer and great intellectual capacity.

I remember thinking to myself after his homily at the funeral for Pope John Paul II that he would be elected in the conclave that would follow. It seems the world came to know Cardinal Joseph Ratzinger in a very different light after he became Pope Benedict XVI. He was shy and humble, and yet he bravely served the Church as Pope for 8 years. His hallmark will be as a great teacher.

Only the Good Lord knows how well he served the Church in his silent prayer these past nearly ten years after his resignation from the Chair of Peter. 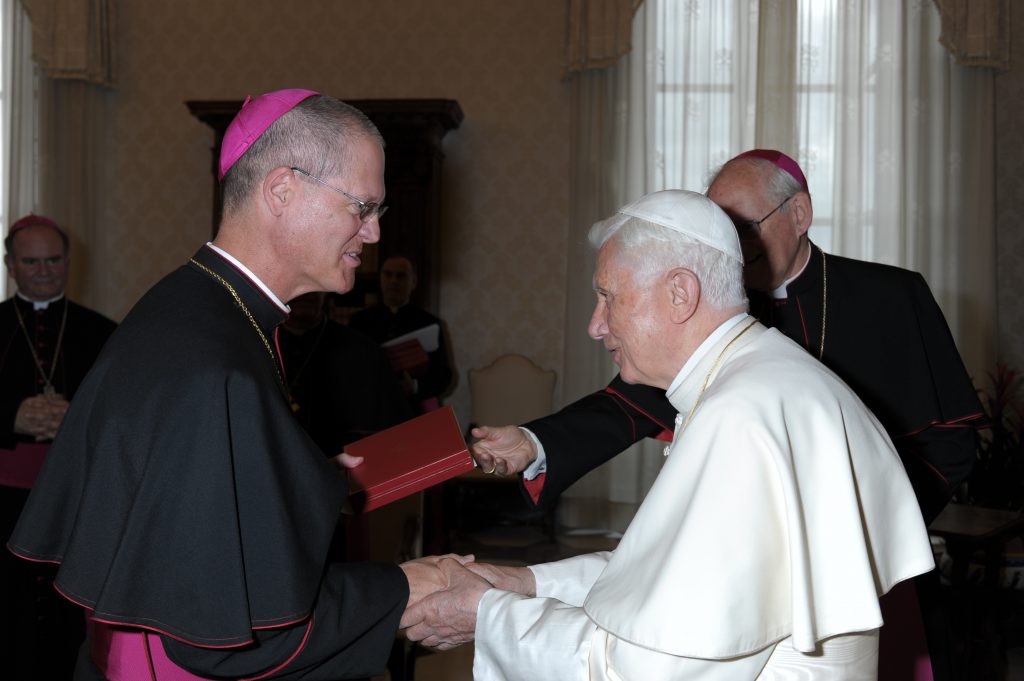 I will always remember the special role he played in my life when he named me the Bishop of Cheyenne in October of 2009. In a little known fact, I took my episcopal motto from his Encyclical Letter of June 29, 2009; Charity in Truth, Caritas In Veritate. I simply inverted the words: Veritas in Caritate, which are taken from St. Paul’s Letter to the Ephesians, 4:15.

O God, faithful rewarder of souls, grant that your departed servant Pope Emeritus Benedict XVI, whom you made successor of Peter and shepherd of your Church, may happily enjoy for ever in your presence in heaven the mysteries of your grace and compassion, which he faithfully ministered on earth. Through our Lord Jesus Christ, your Son, who lives and reigns with you in the unity of the Holy Spirit, God forever and ever.

And let perpetual light shine upon him.

May he Rest In Peace.

May his soul and the souls of all the faithful departed, through the mercy of God Rest In Peace.

Seafarer Ministry In Seattle, An Ecumenical Outreach To Crews Of Transport And Cruise Ships

One of the more unique ministries in the Archdiocese of Seattle is a joint ministry with the Episcopalian and Lutheran churches. Our Seafarer Ministry serves the men and women who serve as crew members on Read more…