Published by Archbishop Etienne on September 9, 2015 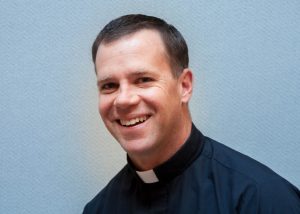 I am pleased to announce that the Diocese of Cheyenne has hired a new Legislative Liaison.  Deacon Mike Leman will begin his new duties on Monday, September 21.  By chance, I had a conversation with Mike shortly after the position came open this spring, and I asked him if he had ever thought about doing this kind of work. Surprisingly, he was interested, and a conversation began.

He has written numerous editorial pieces in recent years for local newspapers on many current social topics.  He clearly loves the Church and brings a strong faith to his new responsibilities.  His theological formation came with his four years of education and formation prior to being ordained a Permanent Deacon for the Diocese of Cheyenne in 2012.  He also hails from Wyoming.  Mike looks forward to taking up his new position and ‘learning the ropes.’

Mike Leman was born and raised on a ranch 20 miles southwest of Douglas, a part of which was homesteaded by his great grandfather Leman back in the 1860s. His mother is from Spain and met his dad when he was stationed there while serving in the Air Force. They both currently live in Douglas. He has two older brothers who work at the North Antelope Coal mine north of Douglas. Deacon Mike exercises his deacon ministry at Holy Trinity parish in Cheyenne. For the last 13 years, he has worked as a firefighter for the Poudre Fire Authority in Ft. Collins, Colorado. He also served in the Army as an Airborne Ranger. His wife Jen is a teacher for Laramie County School District #1, and they have been married for 15 years and they have two beautiful daughters.