Pope Francis, Civil Unions, And The Priority Of The Human Person

Published by Archbishop Etienne on October 27, 2020 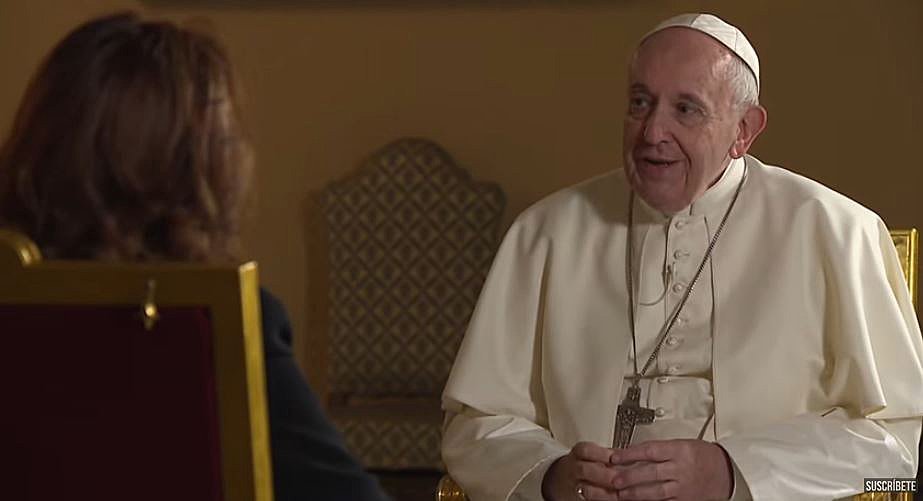 Pope Francis speaks with Valentina Alazraki of the Mexican television station Televisa during an interview that aired in May 2019. Clips, apparently cut from the interview and showing Pope Francis talking about civil unions, is used in the documentary “Francesco” by Evgeny Afineevsky. (CNS screenshot/Noticieros Televisa via YouTube)

Due to an unprecedented amount of press coverage of comments attributed to Pope Francis in a recently released documentary entitled Francesco, I have been encouraged by both the priests and our Archdiocesan Pastoral Council to provide some context. Their request was further strengthened by a number of parishioners after Masses this weekend.

While I have not yet seen exactly what our Holy Father said, he is reported to have made comments in support of civil unions and the legal protections they provide for LGBTQ couples. I do know from prior statements and writings that Pope Francis has expressed his care and concern for people who have same-sex attraction. Here are important facts to keep in mind:

When the Holy Father speaks and or teaches, he is almost always speaking to the Universal Church. The United States already recognizes civil unions of same-sex couples, who are able to marry and receive all the legal protections which that guarantees. However, in many other parts of the world, people with same-sex attraction face considerable oppression, including in some countries, death.

Similarly, and this is very important, Pope Francis continues to strongly support the teaching of the Church that marriage is between a man and a woman and is a permanent union. He has no problem making the necessary distinction between the two realities of civil unions and marriage. His focus on civil unions is more about public policy than church teaching.

The Holy Father is calling us as Church, as he has on numerous other occasions, to begin with the human person. Catechesis is important, but not the starting point. Building relationships comes first, then instruction, conversion, and integrating the faith ever more deeply into one’s life. In a real way he is challenging the Church to expand the tent. The Holy Father has from the beginning of his pontificate encouraged the Church to welcome all people as children of God who are deserving of love and respect. Indeed, this is what the Catechism of the Catholic Church teaches.

Finally, this is very much in keeping with Pope Francis’ encouragement to be a Church that accompanies one another. Our Holy Father envisions a compassionate Church, one with a maternal heart, willing to overcome insecurity, fear, and a willingness to reject others. Rather, we are called to be a Church that attracts and welcomes others with the love of Christ.