Published by Archbishop Etienne on June 21, 2013 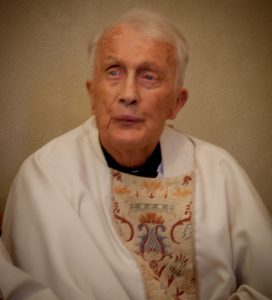 Last night friends and parishioners gathered at Holy Trinity Church in Cheyenne to celebrate the 65th anniversary of priesthood for Fr. James Doudican.

He was ordained in Ireland June 6, 1948, and sent directly to America.  He was called to the rector’s office of the seminary as a young man and told with no fanfare and no discussion that he was being sent to Cheyenne.  No other information was shared.  Father assumed this was a diocese in China, as he wanted to be a missionary.

As Fr. Cronkleton said in last night’s homily, after the trans-Atlantic voyage, train rides to Chicago, St. Louis and Cheyenne, he probably thought he had arrived at the end of the world!

Fr. Doudican is now 96 years old, and quite spry!  I had the good pleasure of being the principal celebrant at the Mass as well as being seated next to our guest of honor for dinner.  He recalled working on the family farm before going to the seminary.

He still celebrates a public, morning Mass every day at the parish, as well as takes one of the Sunday Masses, hears confessions and leads the rosary and benediction on Sunday afternoons.  No doubt, he still doses out the wisdom of his age to those who come seeking his counsel.  He is a man of prayer, and an inspiration to this bishop, all our priests, and no doubt, many others.

Fr. Doudican retired in 1992, the year this bishop was ordained a priest.  He has lived and served every since at Holy Trinity in Cheyenne.  The turn out of people and priests last night was a fitting witness to the respect in which he is held by all.

In his words, he is “honest, holy, handsome, and humble.”  His holiness is evident, as is his simplicity of life.  He has spent a lifetime of service to the People of God.  He is one our Holy Father, Pope Francis would be proud of, and no doubt hold up and an exemplary model of what being a pastor and priest should resemble.