Published by Archbishop Etienne on March 10, 2010 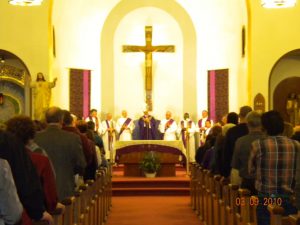 Mother Nature was kind to us last night, and allowed the people of the Rock Springs Deanery to gather for our deanery Mass.  The Rock Springs Deanery is the most far-flung deanery in the diocese, stretching approximately 350 miles from the southeast of Saratoga to the northwest of Jackson.  Once again, we had a nice turn-out with a full complement of priests and a good representation of deacons, with religious, represented by Sr. Betty Lorenz, OLVM who is celebrating her 70th year as a religious!  What a mile-stone!  Congratulations, Sr. Betty.  She is still active in Green River.  Sister’s community is from Indiana, the Victory Noll Missionary Sisters.  Seems I make a Hoosier connection everywhere I go in Wyoming.

We were blessed with two music groups for our Mass, with a mix of hymns in English and Spanish.  All present sang and prayed with a lively faith.  We also included in our Liturgy the Presentation of the Creed for a good number of RCIA candidates.  This gave a unique “flair” to our celebration.  I will also celebrate the Presentation of the Creed with another group at Our Lady of the Mountains in Jackson during Mass this evening.

The 4thdegree Knights of Columbus were well represented once again.  I think these guys must be in competition trying to outdo one another!  I am finding the people of the diocese to be very warm and welcoming.  The Rock Springs area has a great deal of hard working people of many ethnic backgrounds, due to the early industries of railroad and mining.  Today, there is also the strong presence of the energy market drilling for oil, natural gas, and now wind farms.  One unique quality rare to this state of Wyoming is the huge deposits of trona.  Trona is a key element in making glass and baking soda.  These mines employ a great number of people.

The Rock Springs Catholic community was founded in the same year as the founding of the diocese, 1887.  Originally, there were two Catholic parishes; Our Lady of Sorrows (1887) and Sts. Cyril and Methodius (1910).  At some point in the mid 1990’s, the two communities were melded into one, and became the Holy Spirit Catholic Community.  Special thanks to Frs. Carl Beavers and Jing  Baldo for hosting our deanery celebration.  Thanks to Fr. Carl, the priests and deacons enjoyed a fine pheasant dinner, along with a few other Philippine dishes.  All in all, it was a marvelous community building evening!