Published by Archbishop Etienne on August 12, 2013 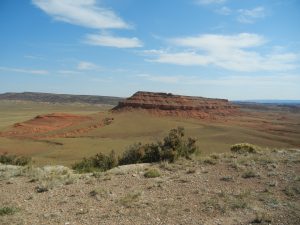 Saturday morning I got some more drive-time in as I made my way first to Casper, and from there to a remote cabin in the southern Bighorn mountains.  I have been in several remote areas of Wyoming, but this cabin is only reached with four wheel drive and determination.

I’m told this part of the Bighorns served as a vital summer pasture for the large sheep herds generations ago.  Still today, there is a large section through the Bighorns designated for such purposes, even though the sheep industry has diminished sharply over the past few decades.  At one time, as many as 5,000 people lived in the Southern Bighorns accompanying the flocks of sheep through the summer pasture range.

Two generous families offered the use of their cabins for the seminarians to use for this year’s summer retreat.  The guys gathered Thursday for a lunch with some of the priests in the Casper area and then made their way to the cabins for the next couple of days.

A seminarian gathering in Wyoming is uniquely different than many, if not most other such gatherings.  Since they are few in number and spend the year apart from each other in various seminaries, the time together is primarily for prayer and building fraternity. 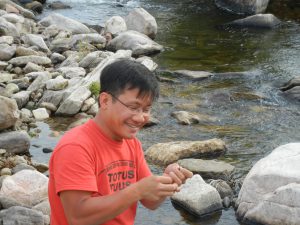 Seminarian Linh Vu enjoying some fly fishing (after the bishop lost the fly!)

The location for this year’s retreat provided a beautiful setting to take in the wonder of God’s creation.  The guys enjoyed some time for hiking, fishing, target shooting and one of them even brought along his bow to practice for the upcoming elk season.

The evenings were spent around a fire discussing their seminary faith experiences, vocation stories and generally getting to know one another on a more personal basis.  In seminary as in priesthood, fraternal support is a critical and gifted part of our lives.

I am very grateful for the hard work of Fr. Bill Hill who serves as our Vocation Director.  Having served myself as a Vocation Director for a number of years, I know the unique challenges that are a part of this ministry.  I believe the seminarians are well served by Fr. Bill, and they expressed such gratitude. 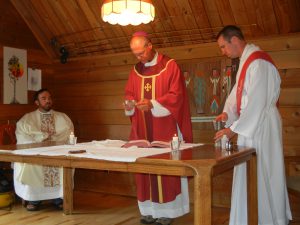 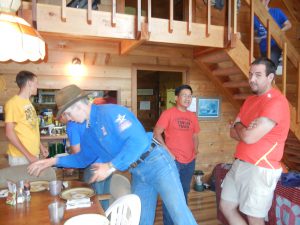 Seminarians prepare for a meal