Published by Archbishop Etienne on May 6, 2011 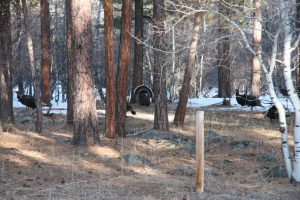 God is good and His creation is awesome!  It was a beautiful morning along the Laramie Range, near Wheatland.  The temps were in the low 50’s and there was very little wind, which is very unusual for this area!  The mountains still hold quite a bit of snowpack, so the viewing was spectacular.

I met the landowners around 6:45 and they pointed me in the right direction, gave me some basic guidelines, and so began the hunt.

There were ducks, geese, deer all over the place.  It was a wildlife haven!  I walked a pretty good way along a fast moving stream before locating any turkey.  And wouldn’t you know it, they were on the other side of the stream.  It was so full from Spring runoff and just wide enough that there was no place to cross.  Turkey hunters always hear it is impossible to call birds across water, but that was the only option for the day.

I moved to a small rise in a cottonwood stand and set up some decoys, and began calling.  At first, it seemed they were only interested in feeding away from me.  Then, the tail end of the group of turkey had a nice “Tom”, and he wanted to “talk”.  So, the game was on!

I’d call and I could see him strut and fan out along the field edge.  Then, a group of hens started answering my yelps with their own excited yelping.  At first, I thought there was another hunter set up across the stream, but the calls were all natural, and just kept up.  Occasionally, the ole Tom would gobble.  That is the best part of turkey hunting!

Then, the others started coming back my way, and before you know it, they moved down to the stream where more gobbling and strutting continued.  By now, they were below my line of sight, so I could not tell how many birds were still in the area.  My heart was pumping!  Every so often, I’d get a glimpse of one of the strutting Toms.  Things went quiet for a good while.

After what seemed like a long time, I thought the game was up, so I crawled to the edge to see what if anything was going on.  As luck would have it, there was a good group there, and of course, I “busted” them.  Game over.  However, they had crossed the stream, and started heading back in the direction I came from.

So, I got above them on a nice field, and moved as fast as I could to try to cut them off.  After a lengthy stretch, little did I know, the birds were still ahead of me.  As I came through a large section of brush, I saw something move off to my right, and there was a large group of Toms slowly feeding.  So, I picked the closest one. .  . now I’ll be feeding on him!