Published by Archbishop Etienne on January 4, 2011

Today the Church recalls our first native-born, American Saint; Saint Elizabeth Ann Seton.  Mother Seton was raised Episcopalian, and converted to the Catholic faith.  She had a deep spirituality at the heart of a difficult life.

Saint Elizabeth was a wife and mother of five children.  She lost her husband and also buried several of her children.  As with all human experience, these events played a role in the developing faith life of this devout woman, and foundress of the first Congregation for religious women in the US, the Daughters of Charity.  (Founded in 1812)

This Congregation, led by the vision and spirituality of Mother Seton focused primarily on education, especially to the poor.  Mother Seton helped lay the ground work for the Catholic School system of today. 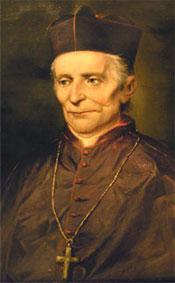 Of particular interest to this author is the spiritual friendship that developed between Mother Seton and a French priest who was working nearby.  Mother’s Daughters of Charity were founded at Emmitsburg, Maryland.  Near the same time as this founding, a young priest arrived from France to begin work at a new seminary, Mount St. Mary’s.

This young priest was young Fr. Simon Brute de Remur.  As their friendship grew, Fr. Brute became the spiritual director of Mother Seton.  They shared a great deal of faith, insight and support over the years.  The night Mother died, (+1821) Fr. Brute came to her side to offer the sacraments of the dying.

In 1834, Fr. Brute was named the First Bishop of the Diocese of Vincennes, Indiana where he served a faithful and holy life until his death in 1839.  The Diocese of Vincennes would later become the Archdiocese of Indianapolis.  Bishop Brute’s own cause for sanctification is now under review, and he has been designated, Servant of God.

For more information on the life of Bishop Simon Brute, you may visit the website of the Archdiocese of Indianapolis.

Church: Drawing Near To The People Of God

In his Letter to the Philippians, St. Paul says: “I hold you in my heart, you who are all partners with me in grace”. This expresses well my own sentiments as a bishop and pastor, Read more…