Published by Archbishop Etienne on August 24, 2014

When the numerous day journeys into the diocese begin, it is a clear sign that summer has reached its end. The fact that some snow flew already in the higher elevations this Saturday also indicates that Autumn and old man Winter are not far off! 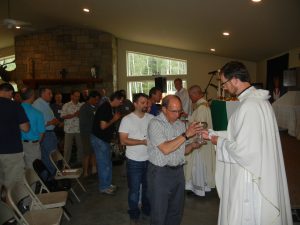 Friday afternoon I left Cheyenne to join this year’s gathering of men for the Wyoming Catholic Men’s Retreat in Centennial, Wyoming.  I’m told there were approximately 55 men signed up for this year’s retreat.  The location had a large two story lodge with a large room upstairs for presentations along with a few sleeping rooms and a kitchen and dining hall on the main floor.  Sprinkled throughout the woods were several cabins and a shower / bath house where the majority of participants were getting settled in to their rooms.  A few of the braver souls pitched tents as a light rain began to fall.

Around 5:00, I along with Fr. Steve Titus and this year’s retreat director, Deacon Vernon Dobelmann, celebrated Mass with the participants.  The group is blessed with some pretty good musicians and the spirit of the group revealed itself quickly in the quality and volume of the signing.  These guys clearly came to pray and open their hearts to the Lord.  Following Mass, I joined the men for a meal, and then departed up the mountain to Ryan Park where I would spend the night in a cabin with one of our priests, Fr. Sam Hayes. 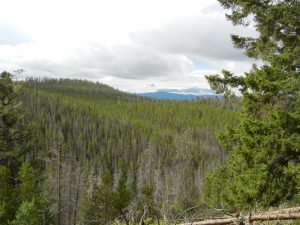 Wyoming has  been experiencing perhaps one of the best year’s for moisture in memory of most people.  After a great winter snow pack, the rains have continued through the summer.  Rain fell in the mountain Friday night and Saturday morning, and I’m told there was even some snow in some of the higher elevations around the state.  On a brisk break in the weather Saturday morning, Fr. Sam and I took two four wheelers up into the Medicine Bow National Forest for a little sight seeing.  There were clear blue skies when we left the cabin, but the clouds quickly moved back in and the temps dropped to about 50 degrees and we were hardly back in the cabin an hour and a half later when the rain began again.

Needing to be in Wamsutter for a 4:00 Mass Saturday afternoon, I drove the highway through the Snowy Range to Sarratoga.  From there I made my way north to I 80 and West to Wamsutter. 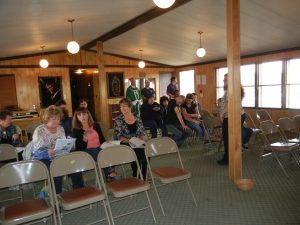 St. Anthony in the Desert is the name of our Mission Church there, and there is a Mass celebrated once a month.  This church was provided by Catholic Extension Society in 1980, and it sits in the corner of a parking lot just off of I 80.  The area around Wamsutter is one of the largest natural gas fields in the country.  It is a very small community, fairly isolated from the nearest towns in either direction.

However, about 20 people showed up for Mass, and we had a very nice visit and celebration.  After visiting a while after Mass, I continued west to spend the evening with our two priests at Holy Spirit in Rock Springs.  This parish serves not only St. Anthony in The Desert, but also St. Christopher in Eden and St. Vivian in Superior. 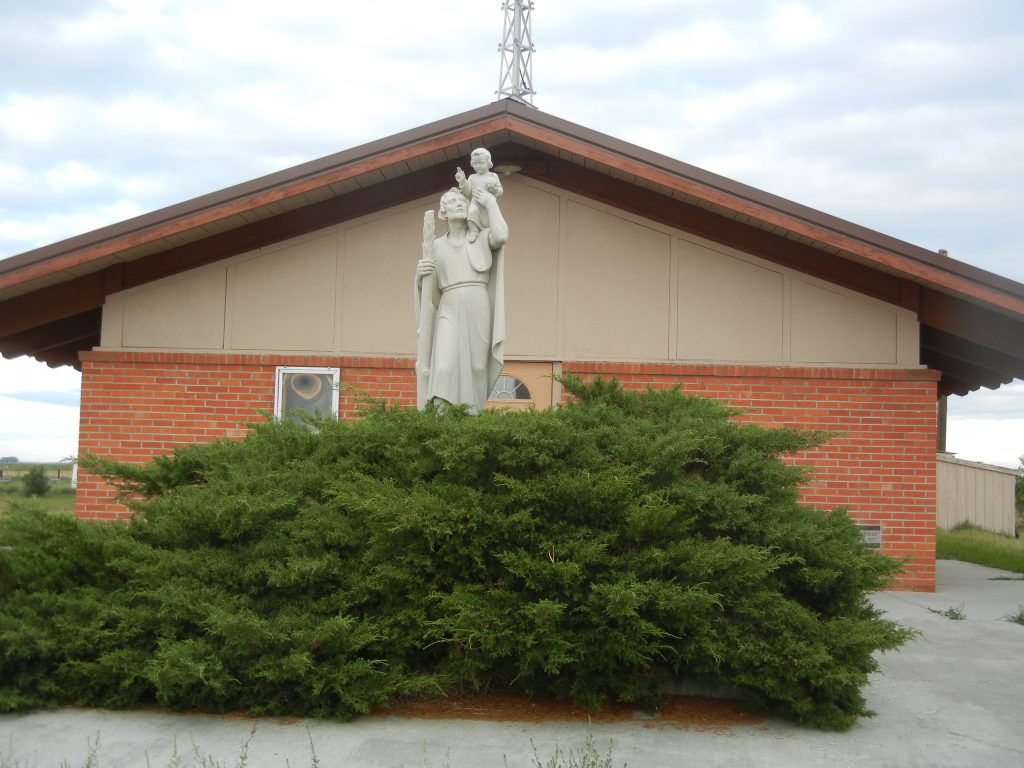 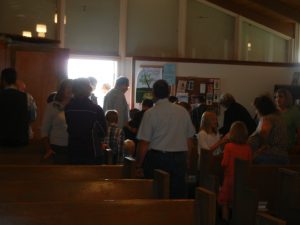 Following dinner with Fr. Glen and Fr. Emilio and a good night sleep, I was scheduled for the 8:00 Mass in Eden.  The drive to St. Christopher is about 40 minutes NW of Rock Springs.  Here again, the people gathered for Mass with their bishop.  There were close to fifty people in attendance.  This mission serves primarily the people who live in Eden and Farson.  This mission church was built in 1957.  There is no running water, no parish hall, just a nice block built church.  Despite the lack of space, there was a table set up in the back of church that was filled with baked goods and coffee to be served following Mass.

There were a number of young families, and quite a few young children running around following Mass.  Much of the conversation revolved around the communities hopes to add on to the existing church in order to provide a hall, restrooms and some classrooms for religious education.  Once again, it was a nice visit with some down-to-earth people. 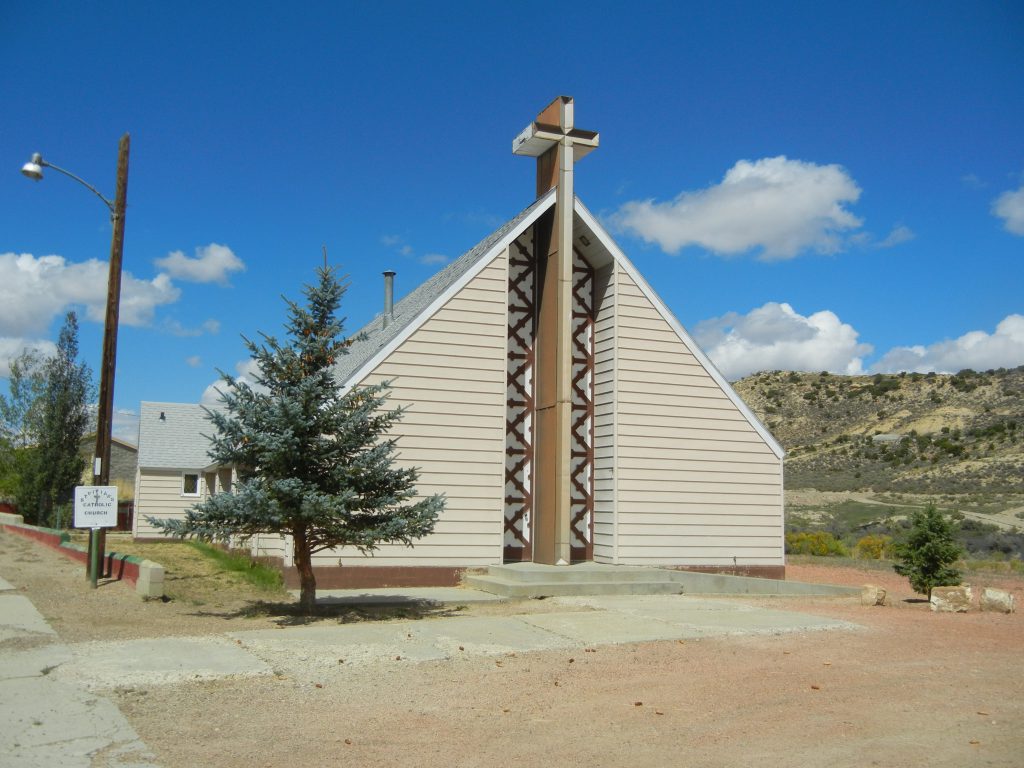 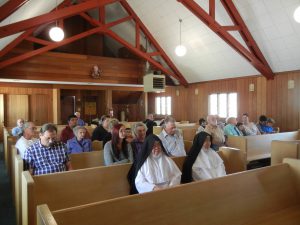 One stop left to make, I headed back to Rock Springs.  Fr. Glen and I had another brief visit before he celebrated the 11:00 Mass.  Between the two priests and myself, there were nine Masses this weekend for the two churches in Rock Springs (one parish) and the three mission churches.  About noon I began my journey back towards Cheyenne with a stop in Superior for a 1:00 Mass.

Superior once boasted a population of nearly 5,000 people I’m told until the local Union Pacific Coal mine closed around 1960.  Now the population is around 280, and there is a Mass once a month at St. Vivian.  Today, about thirty people showed up, many of them coming from Rock Springs.  There is so much history in these local communities, and the people love to tell their family connection to the Church and the community.  I was also hoping to see some of the wild horses that are in the nearby desert, but they did not cooperate today.

So, after making several stops over the past three days, it is good once again to be home.  Now, it is time for a little stroll, and then some rest.