Published by Archbishop Etienne on November 6, 2022

A few weeks ago, on the Feast of St. Luke the Evangelist, I had the great joy of dedicating a new altar at St Luke Parish in Shoreline as well as blessing a new narthex for the church. I believe this was the fourth altar I have dedicated in the Archdiocese of Seattle.

The Order of Dedicating an Altar reminds us of the centrality of Eucharist in the Christian life. It is the “center of the thanksgiving that is accomplished through the Eucharist.” (General Instruction of the Roman Missal, GIRM #296) The altar is the place at every Mass where we meet Christ, who according to scripture, is the Priest, Victim, and Altar of his own sacrifice. (cf. Order of Dedication of an Altar #1)

Moreover, the rite tells us that we are deeply connected to the altar in our churches because, “the Christian faithful who make time for prayer, who offer petitions to God and make sacrifices of supplication, are themselves living stones from which the Lord Jesus builds the altar of the Church.” (Order of the Dedication of an Altar #3). The dedication of an altar through powerful sign and symbols points out to us that Christ is in our midst and who we are called to be as Church, as people of prayer. 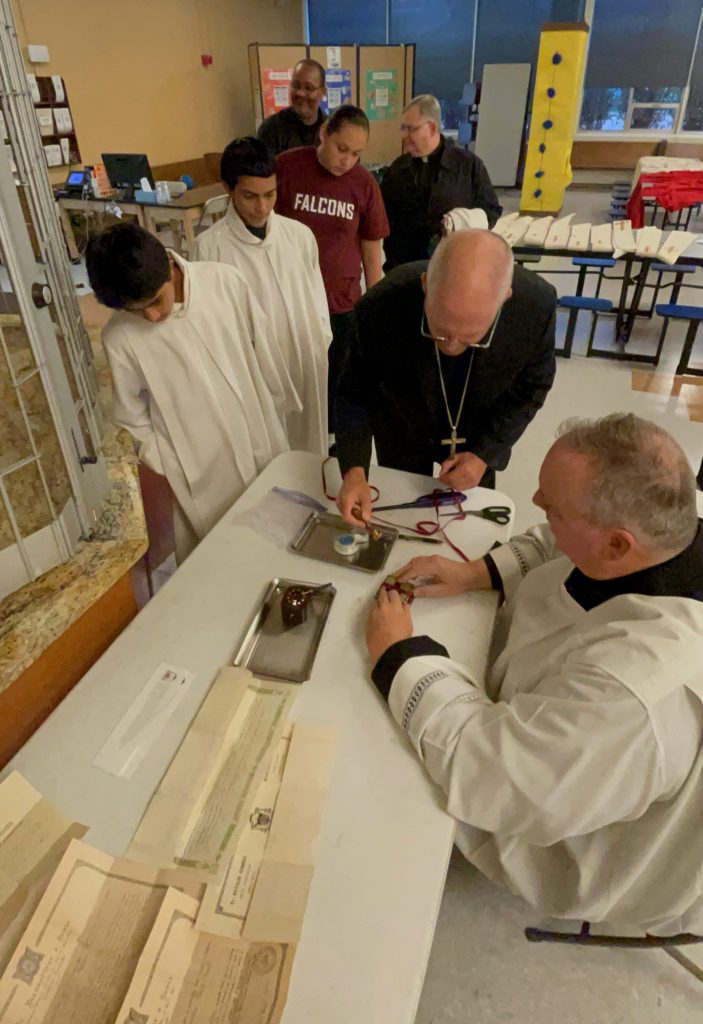 The relics of Martyrs or other Saints are to be deposited under the altar to signify that all who are baptized in the Death of Christ, especially those who have shed their blood for the Lord, share in Christ’s Passion. The placing of relics under an altar also recalls the practice of the early Church celebrating Mass in the catacombs over the tombs of the martyrs. As a part of the vision St. John received, there is also a passage from the Book of Revelation which speaks of the souls of those who were killed: “I saw underneath the altar the souls of those who had been slaughtered because of the witness they bore to the word of God.” (Revelation 6:9)

The GIRM also states: “The practice of the deposition of relics of Saints, even those not Martyrs, under the altar to be dedicated is fittingly retained. However, care should be taken to ensure the authenticity of such relics.” (#302)

The relics placed under this altar at St. Luke included one of their patron, and four others; St. Luke, St. Agnes of Rome, St. Philomena, St. John Vianney, and St. John Bosco.You can see in the photo where I am placing my seal on the wax of the box containing the relics documents authenticating each of the relics. 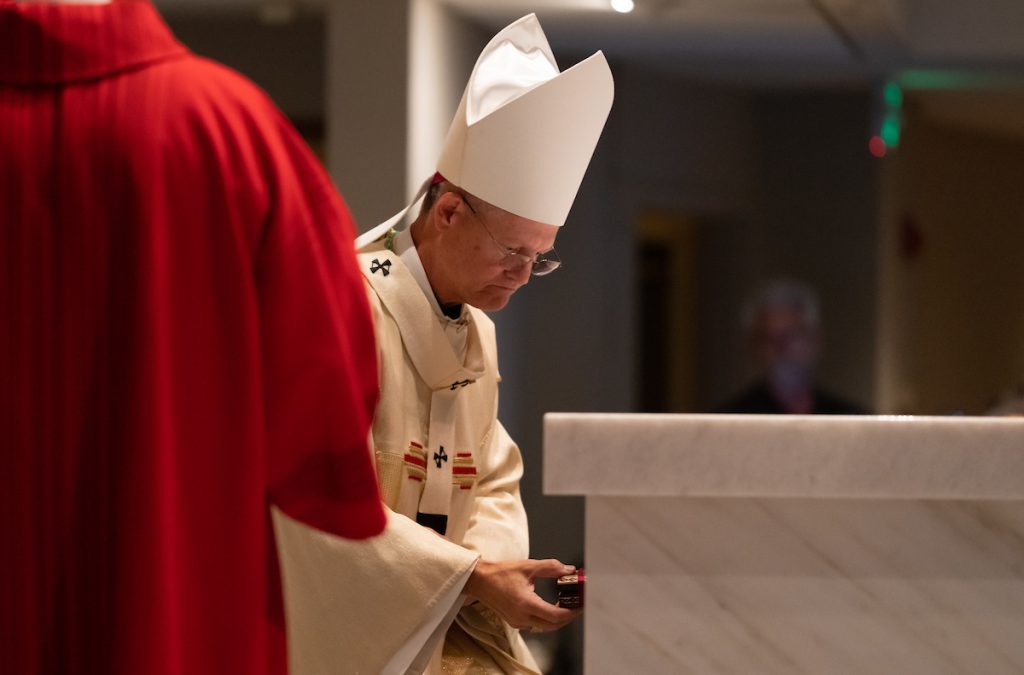 By the anointing with Chrism the altar is made a symbol of Christ who, before all others, is and is called, the “Anointed One”; for the Father anointed him with the Holy Spirit and constituted him High Priest, who on the altar of his Body would offer the sacrifice of his life for the salvation of all.

Incense is burned on the altar to signify that the Sacrifice of Christ, which is there perpetuated in mystery ascend to God as a pleasing fragrance; this is also the sign that the pleasing and acceptable prayers of the faithful rise up to the throne of God.

The covering of the altar indicates that the Christian altar is the altar of the Eucharistic Sacrifice and the table of the Lord.

The lighting of the altar reminds us that Christ is “a light for the revelation of the gentiles.” whose brightness shines out in the Church and through her upon the whole human family.

The Eucharist, which sanctifies the hearts of the those who receive it, in a sense consecrates the altar, as the early Fathers of the Church assert more than once: “This altar is an object of wonder, by nature it is stone, but it is made holy after it receives the Body of Christ,” (from a homily of St. John Chrysostom)

Special thanks to Fr. Jim Johnson who is a huge help in preparing for these dedications as well as serving as MC during Mass. He was also a big help in pulling together information for this blog. 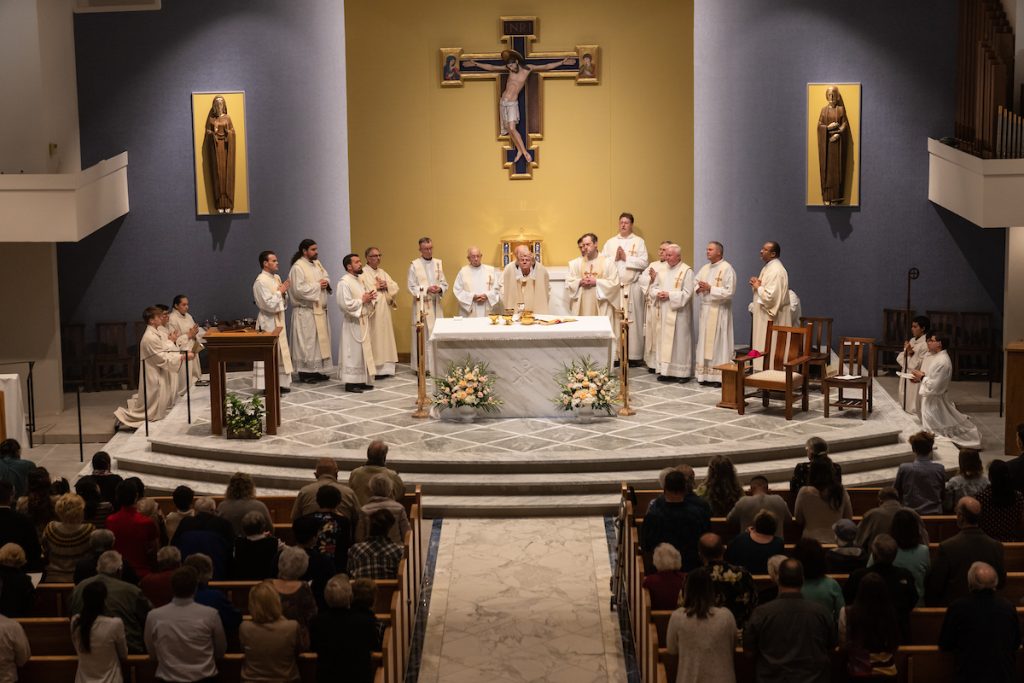