The Challenges of the Palestinian People

Published by Archbishop Etienne on April 23, 2015

One sad reality that came more clearly into view for me during our recent pilgrimage to the Holy Land is the plight of the Palestinian people under the Israeli policies.  If you have kept up with this blog in recent weeks, you know what a powerful experience we had during our time walking in the footsteps of Jesus throughout the Holy Land. 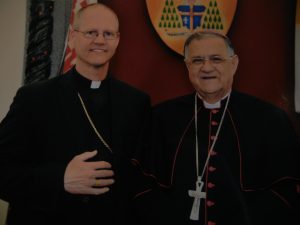 Faith is such a precious gift, and for people to continue to have access to the land Jesus made holy is crucial.  For Christians in particular to continue to make pilgrimage to these holy sites is so important to support and encourage our Mother Church in the Holy Land.

It is important to recall here that the Palestinians are indigenous people to this land.  Many Americans do not understand that Palestinians are Arab, divided between Christian and Muslims.  They trace their lineage and roots back to the time of Jesus and beyond.  The land at the time of Jesus was called Palestine, and Jesus himself was a Palestinian Jew.  As a nation, the Palestinians experience great harmony between the Muslims and the Christians.  The Palestinian Christians of today are direct descendants of the early Church.  They are the ‘living stones’ of the Church today, still present in the Holy Land, though they are being unjustly oppressed and systematically forced from their homeland.

Today, the Latin Patriarchate serves the Christian communities from East Jerusalem, the West Bank (of the Jordan River), the Gaza strip and Jordan.  I believe Cypress is also included.  Humanitarian aid is a primary service provided in and by this local church.  Due to the security wall that has been erected in recent years by Israel, the Palestinian people face growing economic challenges, with unemployment rates over 30%.  Thus, these Christian families struggle to make a living and provide the basic necessities of life for their families.

As you probably already know, Israel has been building a so-called ‘security wall in recent years, structurally isolating the Palestinians from their own lands.  The two local priests we met spoke passionately about this security wall with its numerous checkpoints and obstacles which make life very complicated for the Palestinian families.  It has separated families, restricts movement of those enclosed within its walls, and cuts the Palestinian people off from their own lands, employment opportunities and the ability to even visit the Holy sites in Jerusalem without a permit (which are extremely hard to obtain, and often denied.)

For example, those living within Bethlehem and its surrounding Palestinian territory are living in a veritable 5 mile by five mile prison.  Think of being a child raised under such conditions with no freedom.

Since the founding of the Jewish State of Israel in 1948, the number of Christians in Israel and Palestine has dwindled from around 20% of the population to less than 1.5% today.  The policies and laws of Israel are clearly seeking to diminish the Arab population from the land, thus increasing the Jewish population through the building of settlements and Jewish neighborhoods in the heart of Arab lands.

Gaza, which our group did not visit, is also Palestinian territory.  Gaza is perhaps the most densely populated area in the world.  The are approximately 1.8 million people living in this small strip of land, and only about 1,300 of them are Christian.  80% of Gaza’s inhabitants depend upon humanitarian assistance.

I know I do not fully understand the long history of these people and this land, but it is clear that the Palestinian Christians need the support of the broader Church.  The patriarch asked us to do three things: Pray, Pilgrimage, and Projects.  Obviously, prayer can move mountains, and to a large extent, it would appear that God alone can bring peace to this troubled area of the world.  Second, as stated already, the “Mother Church” in the Holy Land needs our presence, and they need our support.  Finally, whatever we can do to support the many humanitarian needs, we should do so.

Below is a video regarding the works of the Latin Patriarchate.  I think you will find it helpful to better understand the challenges they face.

Let us pray for the Peace of Jerusalem, and all of the Holy Land and Middle East.