The Reciprocity of Love Among the Disciples of Christ

Published by Archbishop Etienne on February 26, 2014 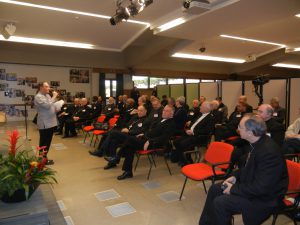 Several months ago, I was asked to join a group of bishops from around the world who come together once a year as ‘friends of the Focolare movement.’  Our conference this week is being held at their ‘Mariapolis Center’ in Castle Gandolfo.  This facility was originally the audience hall for the pope’s while they were at the summer residence.

This movement, officially known as the ‘Work of Mary’ was founded around 1943 by a lay woman whose name was Chiara Lubich.

The movement has a very simple, yet profound spirituality which is found in the Gospel of St. John.  Fundamentally it is a charism of unity based upon the new commandment of Jesus: “Love one another as I have loved you.”  (John 13: 34)  It is also in John’s Gospel that we hear Jesus pray the night before he died: “Father, may they be one, as you and I are one.” 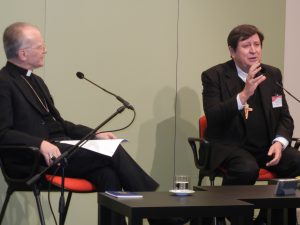 I was first introduced to the Focolare in 1988 when I met a couple in Indianapolis who were living the Focolare spirituality.  Jim and Millie Komro have been friends every since, and my sole connection with Focolare until I became a bishop.

Present for this convocation are approximately sixty five bishops, representing just about every continent of the world.  Our reflections and prayer are focused on strengthening our own fraternity and collegiality.  Thus far, it has been a tremendous experience of fraternal and mutual support.  There are three other bishops present from the US and bishops from such places as Damascus, Ethiopia, Switzerland, Luxemburg, Cameroon, Quito Ecuador, Brazil, Thailand, Italy, Germany, Belgium, South Africa, and Madagascar.  Our common language for the week is Italian, which means my brain is getting quite a workout!

One concrete example of the possibilities such a gathering affords was the opportunity I had earlier today to visit with Bishop Joseph Arnaoutian, the Patriarchal Eparch of Damascus, Syria.  I reassured him of our prayers for him and the Church in Syria, as well as all the people of his country presently under the scourge of war.  He said the Church in America has a great role to play in helping secure peace for his country.  He also wisely offered that perhaps the biggest challenge of today is to re-unite the Eastern Churches with Rome.  Unity is indeed the desire of Christ for all of us and for His Church. 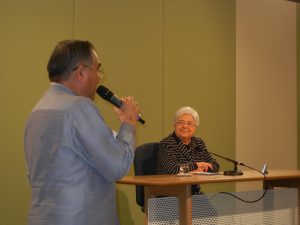 Maria Voce, President of the Focolare Movement with Archbishop Francis Kriengsak of Bangkok.

We are joined by numerous others for our reflections.  Yesterday we had the good fortune of a visit by Cardinal Joao Bra de Aviz, Prefect for the Congregation of Consecrated Life and Bishop Vincenzo Zani, Secretary of the Congregation for Catholic Education.  Bishop Zani gave a brilliant synthesis of Pope Francis’ recent Exhortation, The Gospel of Joy.  And then both he and Cardinal Aviz responded to questions and insights from the gathered bishops.  Today, the President of the Focolare movement spoke to us on the theme of this year’s gathering; the reciprocity of love among the Disciples of Christ.  She is clearly a woman who lives the Gospel, and carries out beautifully the spirit of their foundress, Chiara Lubich.

Our discussions will resume shortly for the remainder of the day.  In the morning, we are blessed to have an audience with Pope Francis.  I hope to write more following our gathering tomorrow with our Holy Father.