Published by Archbishop Etienne on March 12, 2010 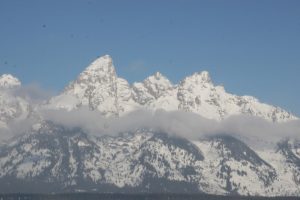 It is now Friday evening, and I am back home in Cheye nne.  Since Tuesday, this tour of the diocese took me just over 1,000 miles.  My day yesterday started early in Jackson as I departed from Our Lady of the Mountains.  The picture to the left was taken as I made my way through the Tetons to Thermopolis for the next deanery Mass.  On the way, the drive was as close to “prayer” as anything I’ve ever experienced behind the wheel of a car.  The drive over and through the mountains was spectacular!  The beauty of God’s creation certainly leads one to ponder the Creator, and to give thanks for all His wonder, power, and life-giving Spirit.

Before going to Thermopolis, I wanted to stop at the St. Stephen’s Indian Mission for a brief visit.  The mission was founded, and operated by the Jesuits for the past 126 years.  The fine Jesuit priest presence will end this August.  The people of St. Stephen as well as the Diocese of Cheyenne will miss these fine priests!  Just last week, we celebrated the feast of St. Katherine Drexel.  St. Katherine’s generous support helped to found this Indian Mission.  I enjoyed a brief tour of the facilities, and lunch with the priests and Sr. Theresa Frawley, OFM before continuing my journey to Thermopolis. 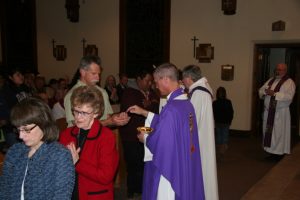 Fr. Hugo Blotsky, OSB welcomed me to St. Francis Assisi with true Benedictine hospitality.  Fortunately, I had the chance to rest from the long drive from Jackson and the Indiana Mission before the evening dinner with the priests and Mass.  Interestingly, there are no permanent deacons in the Thermopolis deanery.  However, there are several in the next formation class.  I believe the Thermopolis deanery wins the award for the most servers present for Mass!  What a great group of servers we had last night.  Once again, I believe all the priests made the effort to be present for the Mass, and there was standing room only as the church was filled with people from around the deanery.

As is getting to be the custom, the people greeted me warmly and we had a lovely celebration, complete with a great reception and lots of desserts.  Clearly, the people like getting together.  Another good-sized group gathered for Mass this morning at St. Francis, and we offered the sacrament of the Anointing of the Sick to those in need.

I just realized something yesterday in reflecting on the excitement of the people of the diocese with regards to their new bishop.   Everyone has mentioned how they waited so long for their new bishop (approximately 15 months).  It is no wonder this was such a “new experience” for them.  The diocese has for nearly 100 years had their next bishop already waiting in the wings as a “coadjutor”.  I’m not sure about Bishop McGovern, but he  began in 1912, and every bishop since then arrived as a coadjutor bishop, which means there was no waiting in the transition of bishops.  Very interesting…

Thermopolis is a lovely town.  It sits at the north end of the Wind River Canyon, which is one of my favorite drives thus far in Wyoming.  It is well-known for the numerous hot springs, and people come from around the world to bath and relax in these springs.  Many people retire to Thermopolis for its natural beauty and the hot springs.  As much of Wyoming, Thermopolis relies on oil and natural gas for local economic support, as well as tourism, farming and ranching.  Thermopolis has a lot going for it.

Well, I’d best get some rest, as another lengthy trip into the diocese begins soon!  The Sheridan deanery is the final stop on the deanery Mass tour!  Thanks to all of the folks along the way in Wyoming for a great week!