Blessed Are The Peacemakers…

Published by Archbishop Etienne on August 12, 2014

Monday evening, August 11, 2014, a very diverse group of religious leaders gathered in the Cathedral rectory in Denver. A special ‘Thanks’ to Archbishop Aquila for gathering these faith leaders.  I was grateful to be a part of the evening.

What ensued was a brief discussion of our concern for all that is transpiring in the Middle East, especially with regards to the rise of ISIS (Islamic State In Syria).

ISIS is conducting some of the worst sins against humanity sins the holocaust of WWII. Persecution, eviction from homes, forcible conversions to Islam, mass murder, indiscriminate killing, is now methodically carried out against Christians, Muslims and ethnic groups. Along with this genocide is a destruction of culture, as ancient churches and mosques are destroyed, along with priceless ancient texts and works of art. In short, a way of life that predates Christ is being destroyed.

Recognizing that people of faith cannot sit silently while such atrocities are perpetuated, this group of religious leaders decided to speak out, calling for concrete action from world and religious leaders to address the deteriorating conditions in Iraq as well as throughout the Middle East. 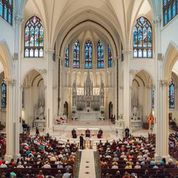 The leaders included members of the three revealed religions, Jewish, Christian and Muslim. We all agreed that the most powerful ‘weapon’ we can bring to the urgent need of all of the people involved in this conflict is our prayer. Recognizing that we are all ‘Children of Abraham,’ and believers in the One, Same God, we came together to pray for peace. As children of One God, we are all brothers and sisters.

After an hour long visit with each other, we entered the Cathedral, where a standing room only crowd gathered, representing the same diversity of believers, to pray for peace. As the religious leaders processed in, we arrived at the sanctuary, where there stood three podiums. Upon each of these stands were placed a Quran, the Torah, and a Book of the Gospels. 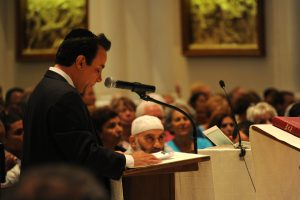 One religious leader from each of the three major traditions read a passage from the Sacred Word, once again followed by an English translation. Archbishop Aquila read a Gospel passage and then offered some moving remarks about our powerful contribution in these days through our prayer, advocacy, and concrete offering of practical assistance to those who have had to leave home and all worldly possessions behind.

The prayer service was deeply moving, and a strong reminder that for people of faith, prayer is strong medicine. The evening was also for me a wonderful experience of God the Father. Jesus taught us to call God Father, ‘our Father.’ When praying with people who do not share our belief in Jesus Christ, but do share faith in the God of all creation, created a tremendous sense of unity, which must be the ‘unity’ Jesus prays for. (John 17: 11)

My dear friends, let us pray for peace! Let us work for peace! Blessed are the peacemakers, for they shall be called children of God.” (Matthew 5:9) 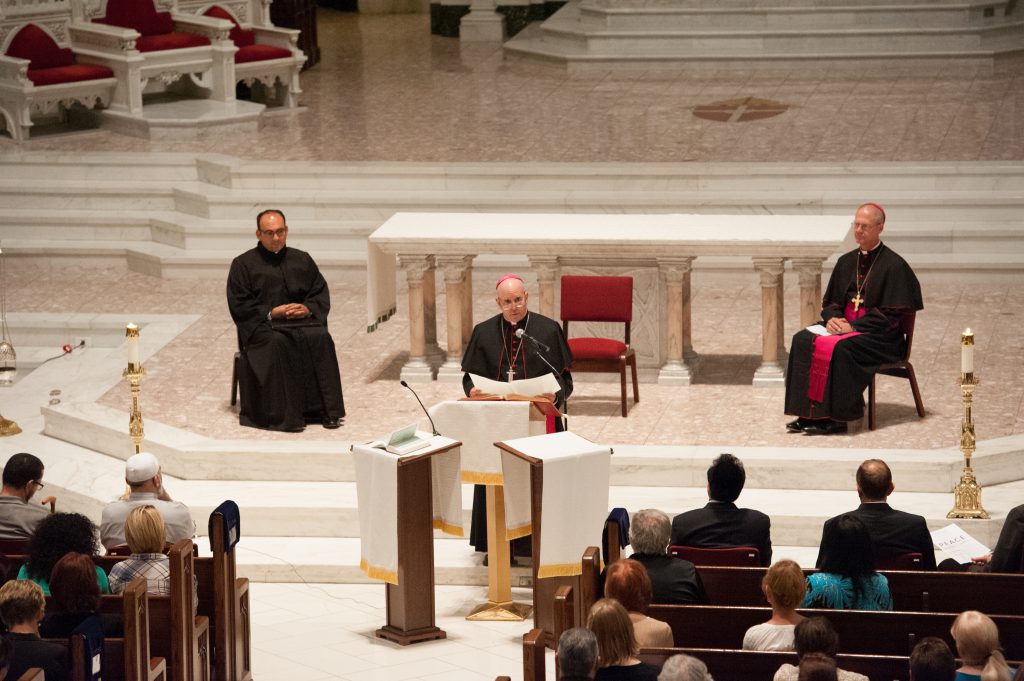 Church: Drawing Near To The People Of God

In his Letter to the Philippians, St. Paul says: “I hold you in my heart, you who are all partners with me in grace”. This expresses well my own sentiments as a bishop and pastor, Read more…