Published by Archbishop Etienne on September 10, 2013 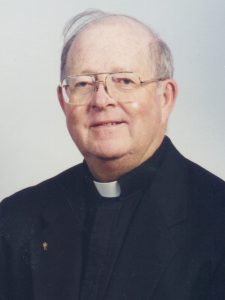 The Diocese of Cheyenne is mourning the loss of a dearly beloved pastor and priest, Msgr. Eugene Sullivan.  He was preceded in death a few years ago by his twin brother, Msgr. Gerald Sullivan.

Msgr. was born in Casper, Wyoming and ordained in 1959.  Only two sisters now remain from his immediate family, and of course, a large ‘family’ throughout the state of Wyoming of brother priests, deacons, and the People of God he loved and served so faithfully for 54 years.

Msgr. Sullivan was a very steady man.  He was filled with faith and that faith gave him a hopeful outlook in all things.  He served in almost every corner of the Diocese, including a seven year term as Vicar General from 1994 – 2001.  He was named a Prelate of Honor in 2000 and retired in 2002.

Last night’s Vigil prayer service was a fine tribute to Msgr. Sullivan.  He was such a fine priest, and the number of priests present last night, and those we know planning on attending the funeral Mass today is evidence that he was a great model of priesthood to his brothers, and more importantly, a source of support and encouragement in time of need.

To the People of God Msgr. Sullivan gave great leadership and pastoral care.  He was foundly remembered by many of the women gathered in Sheridan this week for the WCCW Convention.  Msgr. Sullivan spent his last 11 years of active ministry serving as pastor (and Vicar General) at Holy Name in Sheridan.

Even after retirement, he continued to lend a generous hand to his brother priests in providing coverage.  Retirement gave him additional time to pursue a few of his loves, like University of Wyoming Football games, golf and travel.

In fact, one of the last visits I made to him was in the Emergency Room last Saturday.  We each assumed he would soon be moved to a room in ICU.  After I prayed with him and before I left I asked him: “Monsignor, is there anything else I can do for you?”  And he responded: “Yes, Bishop.  Please make sure there is a TV in my room so I can watch the UW vs Nebraska game.”

This past week, I asked one of his brother priests what his favorite memory was of Msgr. Sullivan.  He replied: “Gene and Gerry were always getting lost.  They had a terrible sense of direction.”  Well, today, the People of God will gather for the final time for the Mass of Resurrection trusting that our prayers for Msgr. Sullivan will aid his course into the fullness of God’s Kingdom.