Published by Archbishop Etienne on July 12, 2010

Yesterday, we commemorated the 170th anniversary of the first Mass ever (documented) celebrated in the state of Wyoming, and more than likely, in the Rocky Mountain region. That Mass was celebrated July 5, 1840 in conjunction with the Rendezvous celebration of the early mountain men in the Green River Valley.

Fr. Pierre De Smet was a Jesuit priest, missionary. He was born in Belgium and came to the US as a seminarian (1821)  to continue his studies towards priesthood. His father was a ship owner, and was quite wealthy.  The young Pierre De Smet was intrigued by reports of the early explorations of the West.  He had a vivid imagination and an adventurous spirit.  It did not take much to entice this young, adventurous man to come to the US to pursue his dreams.

Fr. Charles Nerinckx was also a Belgian priest, who came to the US as a Jesuit missionary in 1804.  Fr. Nerinckxis a well known name back in my home area.  He was a great missionary to the Kentucky Mission, and helped to establish the faith in that part of the Ohio valley.  Fr. Nerinckx was the individual who recruited Pierre De Smet while he was still a student in the year 1821 to come to the US.

In 1823, Bishop Louis Du Bourg of Upper and Lower Louisiana needed priests for the Louisiana Purchase.  He sent a request to Maryland to bring the Jesuits to Missouri, just over 200 acres of land near St. Louis.   De Smet as a young novice was one of the members who made that journey.  Personally, I find it interesting that his path brought him right along the Ohio River where I grew up.  Who knows, maybe he even spent the night on the banks of what would become (1858) my home town, Tell City, IN?

Fr. De Smet was ordained September 23, 1827.  In 1840, Fr. De Smet was sent by Bishop Rosati of St. Louis to the Flathead Indians in answer to one of the repeated Indian requests for the “blackrobes” to teach them the Catholic faith.  It was on this journey that Fr. De Smet celebrated the first Mass in the Wyoming territory.

Sunday started out a bit overcast, but eventually settled into a typically breezy, Wyoming day with clear blue skies and an occasional cloud.  I’m not sure how many people were in attendance, but you can view some of the pictures that follow.  The setting is quite spectacular, as you will see.  It did not take a lot of imagination to fill in the scene from over 170 years ago when it was a marvelous spectacle during the famous mountain man rendezvous, with plenty of mountain men, and native Americans.  When Mass was over, we spotted a beautiful, large, bull moose.  Also, in the distant lower valley meadow we could watch two elk making their way to a stream.

Following the Mass, all proceeded to town for a cookout.  If you are ever looking for a new tourist spot, keep Pinedale and Daniel, Wyoming in mind.  Of course, while you are there, do not forget to go to Mass!

The night before the Mass I enjoyed Mass with the people from the local parish of Our Lady of Peace.  Their pastor, Fr. Lucas is dearly loved, and is a loving pastor to them.  The people of the parish gathered prior to Mass for a chance to socialize, then we had Mass.  Due to all the otherRendezvous events going on, many of the parishioners were “working”, especially at the booths for the rodeo, raising money for the parish.

After Mass, I had a great evening gathering with some of the local ranchers for a dinner.  It was marvelous to meet more of the people of this great diocese, and to watch the sunset in the mountains.  On my way home Sunday evening, I also enjoyed a rare rainbow.  Enjoy the pictures!  When I figure out how to do slide shows with this blog, there will be other great shots to share.  All photos (except the rainbow) are courtesy of Matt Potter, Development Director for the Diocese of Cheyenne. 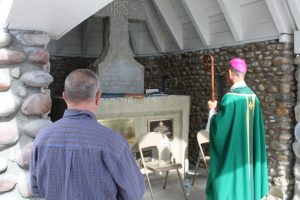 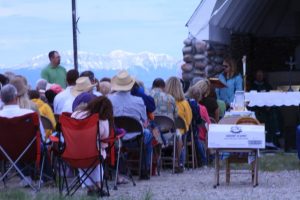 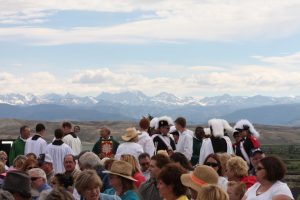 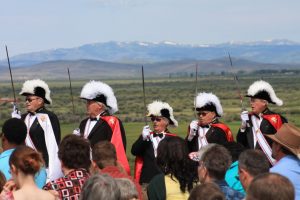 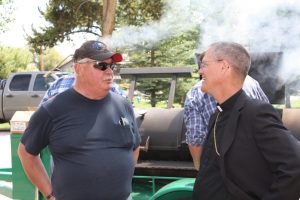 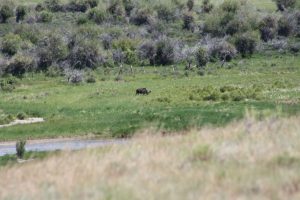 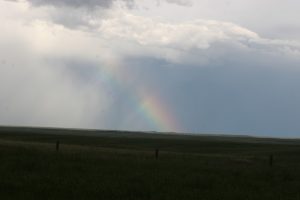