Published by Archbishop Etienne on August 28, 2021 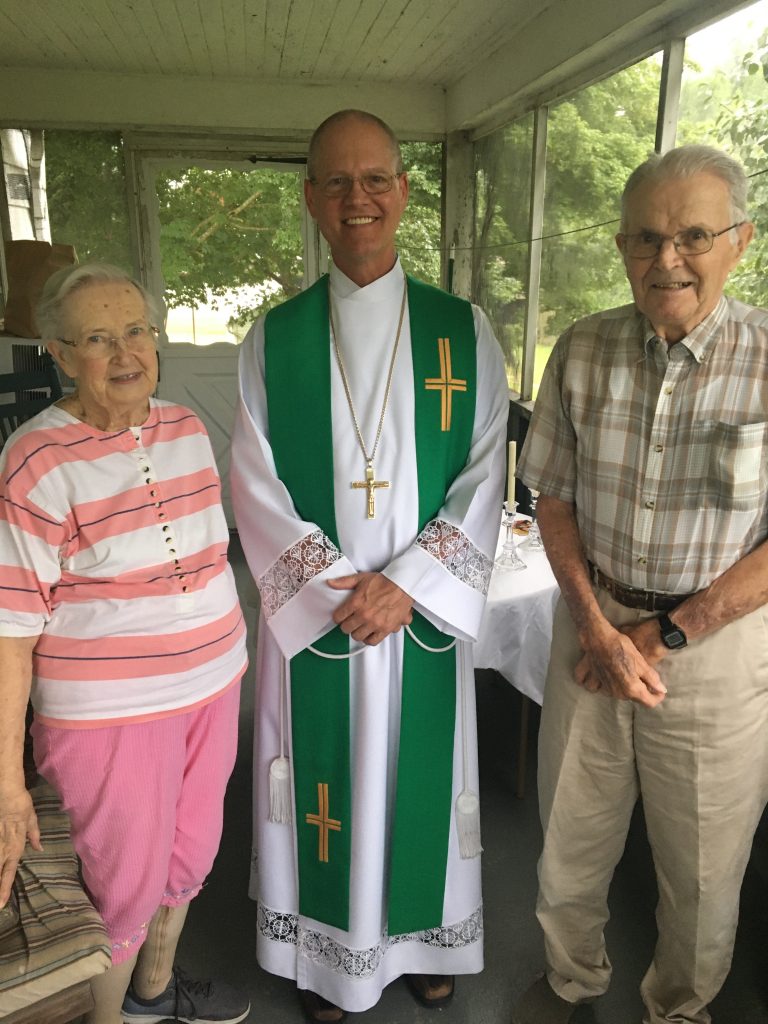 Gloria Leclere, +PDE, Earl Leclere on their screened in back porch – Mass during COVID last summer.

Today we celebrated the Mass of Resurrection for my Aunt and Godmother, Gloria Leclere. Aunt Gloria was born in 1928 in Magnet, Indiana, married Uncle Earl in 1948 and died this past Monday morning. Uncle Earl is now 99 and he and Aunt Gloria were married 72 years! Gloria is my dad’s oldest and only sister. They lost a younger sister, Janet very early in life.

Sometime around 1954 Earl and Gloria bought a farm near St. Mark in Perry County, where they raised their family of five children, Joe, Bob, Jane, Patty and David. They have lived in the same home until this day, and just about every time I am back in Perry County, I make sure to find time to make a visit.

Some of my best childhood memories are when our family visited the Leclere’s on the farm. While Uncle Earl always had a job, he also farmed, raising crops,  chickens, pigs, generally a milk cow and a few other cows for butchering. There was always a vegetable garden, and every summer was labor intensive picking beans, potatoes, corn, tomatoes  and lots of canning!

The first reading today was from the Book of Proverbs (31: 10-31). This passage captured so many of Aunt Gloria’s virtues as a wife, mother, homemaker, friend and servant of the Gospel.

As I shared in the homily today, Aunt Gloria was not one to verbally express much emotion or affection, but she sure put her love into action! She was a woman of great faith, and in these final days was very comfortable talking about ‘going home.’

That, my friends, is what it means to be Church – to LIVE your faith!