Published by Archbishop Etienne on October 5, 2014 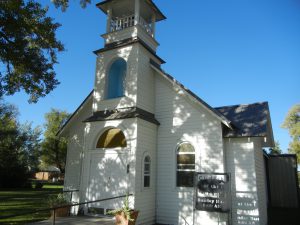 Today, as I mark the 5th anniversary of the phone call I received from then Nuncio to the US, Archbishop Pietro Sambi, informing me that I had been named the Bishop of Cheyenne, I am wrapping up visits to all churches within the Diocese.
This morning I celebrated an 8:00 Mass with the people at Ascension in Hudson. Hudson is just about equally between Lander and Riverton, and just outside the boundaries of the Wind River Indian Mission, home to St. Stevens.

Most of the people who attend Mass at Ascension are actually members of the other three nearby parishes.  There once was a separate religious education program for the members of Ascension, but at this time, the few children living in Hudson receive their faith formation in either Lander of Riverton. 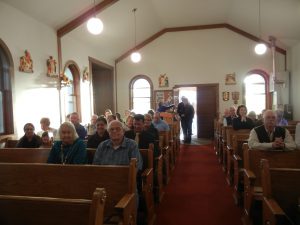 I was impressed with the beauty of this church, and the sense of community shared by those who remained after Mass to share some homemade refreshments.  This time of year, there is lots of conversation about the hunting season, and due to a very successful hunt of my own this past Friday, I now have a story to share as well!

The drive last night from Jeffrey City to Riverton came as the sun began to set over the Wind River Mountains.  There were just enough clouds in the sky to reflect some beautiful shades of red and violet.  One cannot help but give thanks to the Creator for all of His works!  Of course, at dusk, all the wildlife becomes active for another night of feeding, and the antelope and mule deer were everywhere.

God is Good!  All the time!