Published by Archbishop Etienne on February 23, 2014 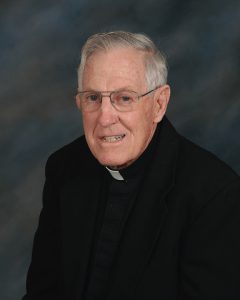 On Friday, February 14, Msgr. Charles Taylor completed his earthly pilgrimage. The Diocese of Cheyenne mourns the death of Msgr. Taylor, but rejoices in his life of dedicated service as a son, brother, uncle, friend and priest.
It seems fitting that I write these words from Rome, where Fr. Taylor studied canon law as a young priest at St. John Lateran from 1956 – 1959. Monsignor was born in Kemmerer, Wyoming on September 7, 1926. He was so proud of being from Kemmerer, and of the deep influence his ancestors had in the layout of the city. Kemmerer is the home of the first J.C. Penny store which opened over 100 years ago, and is still open today.

After a short stint in the navy, Msgr. entered St. Thomas Seminary in Denver.  Msgr. Taylor was ordained in 1953.  During his years of priestly ministry, he served many parishes and many parishioners throughout the Diocese of Cheyenne.  He served in Green River, Casper, Rock Springs, Laramie, Jackson, Powell, Lander, Kemmerer and Buffalo.  He retired…twice.

Upon completing his canon law degree in 1959, he was named defender of the bond.  He continued his studies in the midst of an active priestly ministry, and obtained a doctorate in canon law in 1968.  He had a brilliant mind, a dry wit, and a generous heart.  He generously assisted our tribunal well into his retirement.  Hard telling how many of our priests will miss his guidance.

Fr. Carl Beavers, who preached at the Mass of Resurrection, recalled that perhaps his greatest care as a priest was for the dying.  Msgr. Taylor was tireless in his visits to those who were near death, making sure they knew of the abiding presence of the Lord.  He faithfully, compassionately provided the sacraments of the Church, assuring people of the mercy of Christ.  Msgr. was also well known for his strong beliefs and opinions, which Fr. Beavers summarized as “yes and no on steroids.”

Msgr. Taylor was a man on a mission, and the energy to accomplish it!  As Msgr. Taylor served the church so well for so long, and desired to do so until his dying breath, I ask him now to continue to serve us by praying that other young men from around the Diocese of Cheyenne will hear God’s call to serve the Church as priests.  I pray that Msgr. Taylor rest in peace, and enjoy the promises of eternal life that he hoped in and preached faithfully for nearly 61 years.