Places of the Blessed Mother

Published by Archbishop Etienne on April 17, 2015 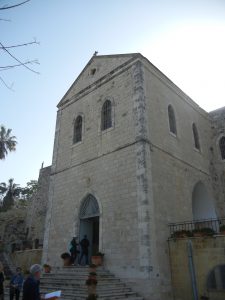 Ein Karim is believed to be the community in the Judean hillsides (Luke 1: 39-40) where our Blessed Mother visited her cousin, Elizabeth. Ein Karim is only 7 miles from Jerusalem and about 100 miles from Nazareth, so it would have taken Mary about two weeks to journey to this town. The literal meaning of Ein Karim is Spring of Generosity, or Spring of the Vineyard. There is a spring in this town which is over 2,000 years old, and tradition says that when Mary and Elizabeth greeted each other, the rock split open and water poured forth, and has been flowing ever since. This is a beautiful tradition which expresses the refreshing life that stems from Our Lady.

Zechariah was a priest in the temple, so he would have been a wealthy man for his time. It is believed that he had a home at two locations here in Ein Karim. The Church dedicated to St. John the Baptist is where it is believed St. John was born. There is a well preserved cave in the base of this church commemorating his birth. 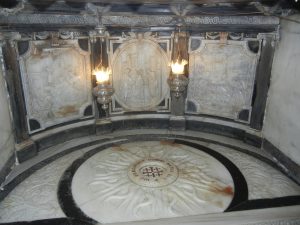 Memorial of Birthplace of St. John the Baptist

As I entered this church, there was another pilgrimage group celebrating Mass, and the priest was just elevating the host after the fraction rite and proclaiming the words of St. John the Baptist: “Behold, the Lamb of God, who takes away the sins of the world!” Amazing greeting to enter this church! Here, I prayed: “Lord, grant grace and blessing to all those who proclaim and preach Jesus Christ. Please grant me the courage to always proclaim his truth, even when it is unwelcome.”

The Basilica of the Visitation sits up on the hillside of this small town, and would have been the summer home for Elizabeth and Zechariah. It is in this locality that the two great Gospel Canticles were first proclaimed. First, Mary’s Magnificat is proclaimed after greeting Elizabeth. (Luke 1:46-55) A few months later, at the circumcision of John the Baptist, Zechariah proclaims the Benedictus. (Luke 1: 68-79) The Benedictus is prayed during Morning Prayer and the Magnificat of Evening Prayer every day in the Church’s Liturgy of Hours. 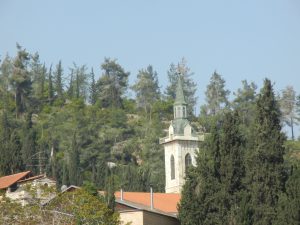 The Basilica of the Visitation, Ein Karim

Another interesting part of tradition holds that since Ein Karim is in the Judean territory, John the Baptist would have been under the threat of Herod when having learned of the birth of the King of the Jews he ordered all boys two years old and younger to be killed. It is thought that Elizabeth and her son, John, hid in a cave at the site of this Church, and had a stone rolled in front of it to keep from being discovered. Thus, the Precursor, John the Baptist, was spared. 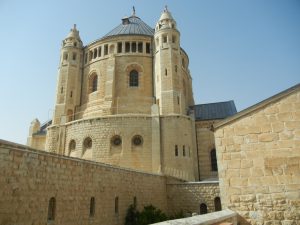 One final place from our visit that is connected with the Blessed Mother is the Dormition Abbey. This Church is located on Mt. Zion in Jerusalem. It is believed to be the site of the home of the Apostle John. As we know from Sacred Scripture, from the cross, our Lord entrusted the care of his mother to the Beloved Disciple, John. It would be easy to believe that Mary lived here with John after the resurrection and asencion.   Even though the greater tradition is that after Pentecost, John and Mary went to Ephesus and that Mary was assumed into heaven from there, there is also a lesser tradition that says that eventually, John and Mary returned to Jerusalem, and her Assumption took place in this location.

So, dormition means ‘sleeping.’ One of the dogmas of the Church regarding our Blessed Mother is that she did not undergo death and the corruption of the grave, but rather fell asleep and was assumed into heaven and crowned Queen of heaven and earth. 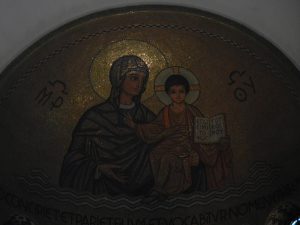 Our group also celebrated at Mass at this beautiful church, which is now entrusted to a group of German Benedictine monks. Here I reflected upon just how much the Church needs a Mother; our Mother Mary. I was also very aware of just how much Mary wants and desires that we turn to her in our need. She is anxiously waiting to help us, and of course her deepest maternal instinct is to lead us to her Son, Jesus. I was also mindful that God wants all of his children ‘in the Church,’ which is to be ‘in the body of Christ.’