Saturday In The Holy Land

Published by Archbishop Etienne on April 15, 2015 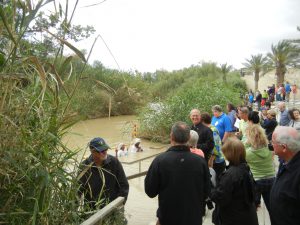 Saturday our group left Galilee behind. We passed into the West Bank and south through the Jordan Valley to the Jordan River for our first stop. The Jordan Valley is the border area between Israel and Jordan. It is a very fertile valley along the river, and some of the best fruits are grown in the region. Along the Jordanian side of the valley, there were miles of greenhouses, where they grow the vast majority of their fruits and vegetables. There were huge palm groves, which grow very tasty dates. Palms cannot be grown from seed, they must be started from a young sprout off of an existing tree.

It is in this vicinity near Jericho that is believed to be the location where Jesus was baptized by John the Baptist. In the time of Jesus, the Jordan followed a slightly different path, and the true location was more than likely about 100 yards away, now in the Jordan territory.

I would guess for most visitors, the first feeling upon visiting the Jordan River is disappointment. It is a narrow little stream, and most of the time quite muddy. But at this location, our group renewed our Baptismal promises and we were sprinkled with the water from the Jordan. As you recall, after his baptism, the Holy Spirit led Jesus into the Judean Desert, which is immediately to the west of the River. 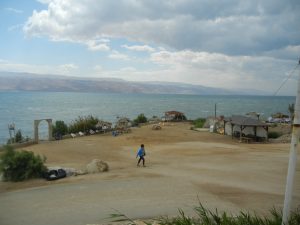 From here we travelled on to Jericho, and just beyond to the Dead Sea. The Dead Sea is 1,300 feet below sea level; the lowest spot on the earth. Across the Sea on the Jordanian side are the Moab mountains, and Mt. Nebo. It is from this sight that Moses was granted a glimpse of the Promised Land. He then died and was buried somewhere in this vicinity.

Many of our group had hoped to swim in the Dead Sea. Its waters have a high salt content, and the mud along the bank and in the bed of the sea are known for its ability to make the skin healthy. However, the day we visited, there were very strong winds, and high waves upon the sea, so it was closed to swimming. I was surprised by how big the Red Sea is. It was quite a beautiful sight. 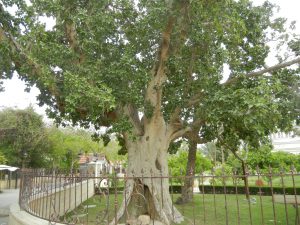 We then made a stop in Jericho at the only existing Sycamore tree. The tree dates to the time of Christ, and receives meticulous care, as a reference to the tree climbed by Zaccheus. The Lord called Zaccheus to come down from the tree so that he might visit him in his home. That day, salvation came to Zaccheus. This Gospel account gave me an awareness that Jesus knows each one of us personally, even before encountering us. And, in our encounter with Christ, we come to know ourselves, and in Christ, salvation comes to each of us as well.

Jericho is an oasis in the desert. There are many springs here, which supply all the inhabitants with their drinking water.   It is the oldest city in the world, nearly 9,000 years old! and just to the west of Jericho, the desert begins, and a small mountain rises. In these mountains are the Cumran Caves, where the Essenes lived many centuries ago, and where the Dead Sea scrolls were found by a small shepherd boy in 1947. 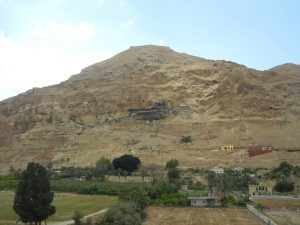 Mount of Temptation; Judean Desert as seen from Jericho

Just outside of Jericho one finds the Mount of Temptation, where Satan appeared to Jesus after his 40 days in the desert. In Jericho, Jesus also healed a blind man.

Our day ended with our arrival in Bethlehem. Once I checked into my room at the Franciscan run Casa Nova, I was delighted to look out my window and realize that I would be sleeping the next two nights no more than 75 yards from the birthplace of Jesus. Bethlehem is in the Palestinian territory of Israel, and completed surrounded by a security wall. I will have a separate post at a later time about this disgraceful reality in Israel.