Published by Archbishop Etienne on April 16, 2015

Well, my friends, as I write this post, our pilgrimage is entering the final 30 hours of our time in the Holy Land. I apologize for the delay in updating this blog on our journey. The days have been long and full, and the internet service since arriving in Bethlehem and here in Jerusalem has been non-existent to sporadic at best! Alas, the penitential nature of a pilgrimage. But, please bare with me as I will eventually get the journey documented, here. 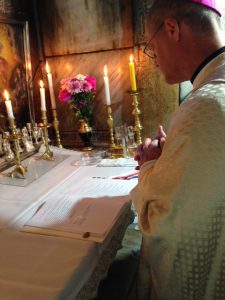 Tuesday  morning was not only the highlight of this trip (for me) but perhaps one of those top ten moments of my lifetime.  When I visited the Holy Sepulcher as a seminarian 26 years ago, it was a noisy event, and did not have much of an impact upon me.  I never would have dreamed then of being able to return, let alone as a bishop, and have the opportunity to celebrate Mass over the place where Jesus was buried, and rose from the dead!

Given 17+ years as a priest, and now an additional 5+ years as a bishop, and all the experience and love of the Lord and his people that have gone into those years, the experience of celebrating this Mass on this morning was more than I can express.

This tomb is very ornate, as is most of the entire church of the Holy Sepulcher.  It is an ordinary type of a Jewish tomb, composed of two chambers, one communicating with the other by means of a low door: the first served as the vestibule (this is where the pilgrims stood for the Mass) and in the second, on a couch cut into the rock the corpse was laid.  This is the site of the altar for the Mass.  The actual place of Christ’s tomb is below this level.  The entrance to the tomb was closed by a massive slab, like a millstone, which rolled into place.  As you enter, you see the first chamber.  This would be where the Angel appeared to the women on the third day exclaiming; “He is Risen!”

I cannot sufficiently put into words the experience of celebrating Mass at this place where Jesus was buried and rose from the dead. Throughout this holy land, not only the Scriptures come to life, but our creed is constantly being called to mind. “I believe in One God, the Father almighty. I believe in Jesus Christ … who was conceived by the Holy Spirit, born of the Virgin Mary, was crucified under Pontius Pilate, was buried and rose from the dead.”

Just 50 yards away from the tomb, and up the Mount of Calvary, Jesus was nailed to the cross where he died. At the base of Calvary, his bruised and bloodied body was anointed and prepared for burial, and finally laid in this tomb. I was highly aware of all of this as I mingled the Body of the Lord with the Precious Blood in the chalice during Mass. Here, the Son of Man died. Here, the Son of God took up his life again in the Resurrection! Here, we once again do as he commanded us: “Do this in memory of me.” Here, he feeds us with his Body and Blood. Here, his teaching takes on the significance of its meaning: “I am the resurrection and the life; whoever believes in me, even if he dies, will live, and everyone who lives and believes in me will never die. Do you believe this?” (John 11: 25-26)