Published by Archbishop Etienne on July 4, 2012 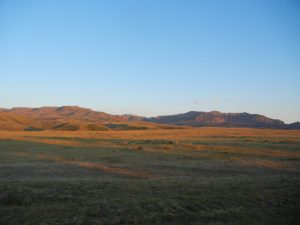 Not far from Meeteese is Carter Mountain, where our Carmelite Monks recently purchased a beautiful piece of property for their new monastery. So, after visiting with the parishioners of St. Theresa, I made my way up the mountain to join the monks.

In anticipation of breaking ground for their new monastery, the monks are busy doing much of the prep work themselves.  They are presently digging a trench for laying a new gas line to the building site and are opening a new gravel pit to be able to provide rock for their long roads.

Their property also includes leases from the BLM (Bureau of Land Management) and the National Forest.  In order to retain these leases, they must run cattle to graze the land, and the minimum number was determined at 123 head of cattle.  So, there has been a great deal of fencing completed, with more needed. 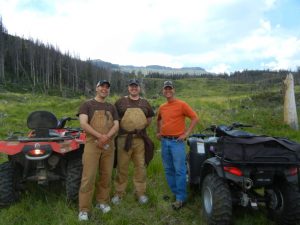 Sunday afternoon, some of us toured what seemed like the entire property on four wheelers.  It felt good on this very hot day to get to the higher elevations and enjoy some cooler temps and a nice breeze.  The property with its streams and mountain views is alone quite beautiful, and will provide a lovely setting for a cloistered, contemplative community of monks.  To further compliment this setting is all the wildlife; antelope, mule deer, white tail deer, moose, and plenty of elk!  I even saw a badger when I left on Monday evening.  Several times while riding around the property, I also saw a few groups of sage grouse…beautiful!

After a full day on four wheelers, we returned to camp for a nice dinner and shared stories from the day.  Then it was time to settle in for a good night’s sleep for the work that awaited on Monday! 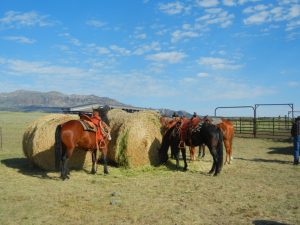 Horses saddled and ready for the cattle drive.

After an early Mass, we saddled up for a day of rounding up cattle and moving them to higher pasture. A gorgeous day awaited us.  Before climbing into the saddle, we took off our hats, and prayed the Angelus, asking for a safe and fruitful day.  The Prior’s dad, Jerry Schneider helps oversee the cattle operation, and joined us for the day.  He always begins each such endeavor asking for the Blessed Mother’s intercession and protection.  Jerry is a life-long cowboy, and bears the marks of what a difficult life the cowboy leads, but he also beams with the joy of such a life as well.  He had one of his young grandsons in tow, Tommy George.  Tommy is amazing to watch on a horse!  He put the rest of us to shame. 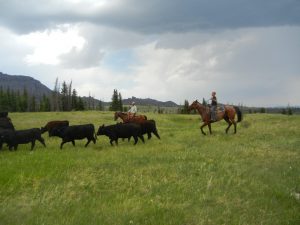 With such vast spaces, and the presence of bears and wolves, the cattle are often breaking down the fences.  This then creates the problem of cattle mixing from different herds.  So, we not only had to round up the cattle in order to move them to higher pastures, but we also had to sort out those that did not belong to the New Mount Carmel herd.  If you have ever herded cattle, you know how ‘bull headed’ they can be.  They love to gather in the shaded, brushy (tough to get to) areas.  Then, once you begin to move them, they have an uncanny sense of wanting to go any direction other than the one desired!

Once we got the first group corralled, it required patience to separate the cows for moving.  This was perhaps the one ‘rodeo moment’ of the day, with some of the heifers getting overly excited and jumping the corral fence.  Once we had this group ready, we began the process of moving them to higher ground and pasture. 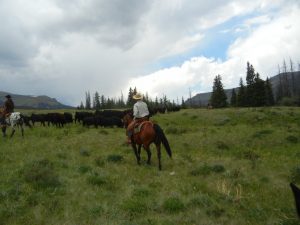 As we moved up the mountain, a storm system developed, and just as we arrived in the mountain meadow, the rain began, with lots of lightning and thunder.  We took cover under some large fir trees and waited for the storm to pass (and prayed that no lightning would strike us!)  I was impressed, and well as relieved, that the cows and horses did not seem to be affected by the lightning.  Once the storm passed, we began the long ride back down to the end of the trail where the horse trailer awaited.  I was more than ready to get back on my own two feet!

Along the ride, we picked up a really nice moose paddle, and one elk antler shed, more evidence of some really nice bulls in the area.  I’m really looking forward to this fall’s elk hunt!  Sunday, we saw probably 50 elk, with one bachelor group that held some really nice looking antlers!

All in all, it was a great day, and gave me an up close and personal experience of how many of our Wyoming people live and make a living.  Cowboying is tough work, but puts one in close contact with nature and the beauty of God’s creation.  In time, our monks will be situated in a perfect spot for growing closer to God, growing in holiness, and praying for the rest of us!  Enjoy the rest of the pics. 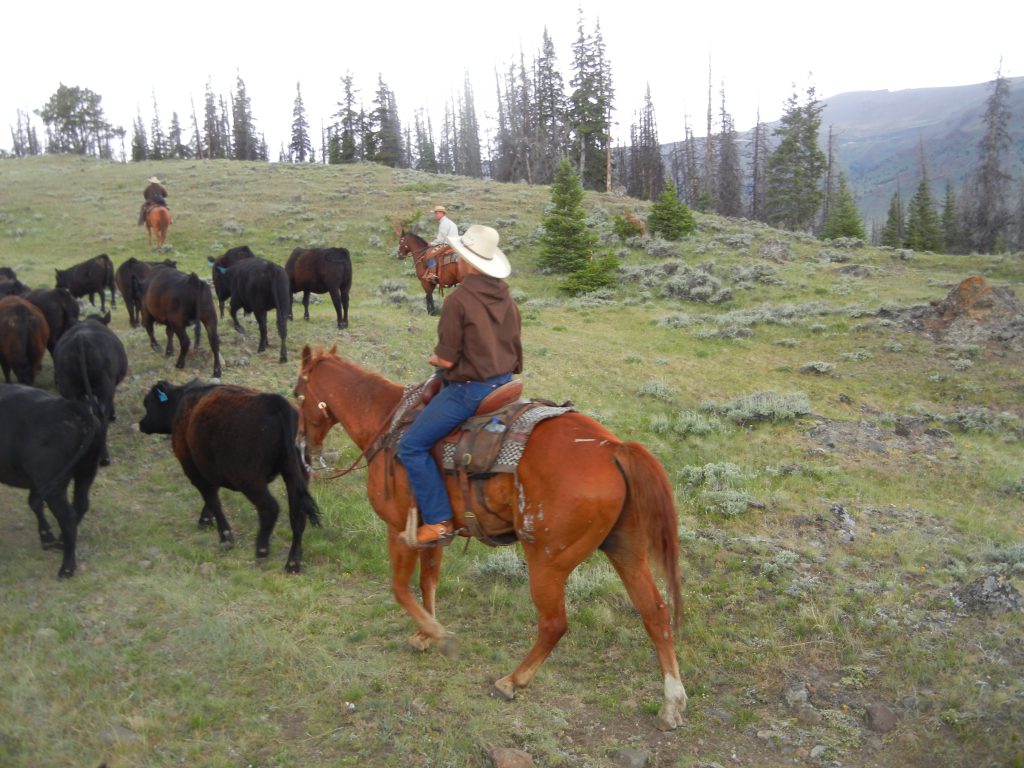 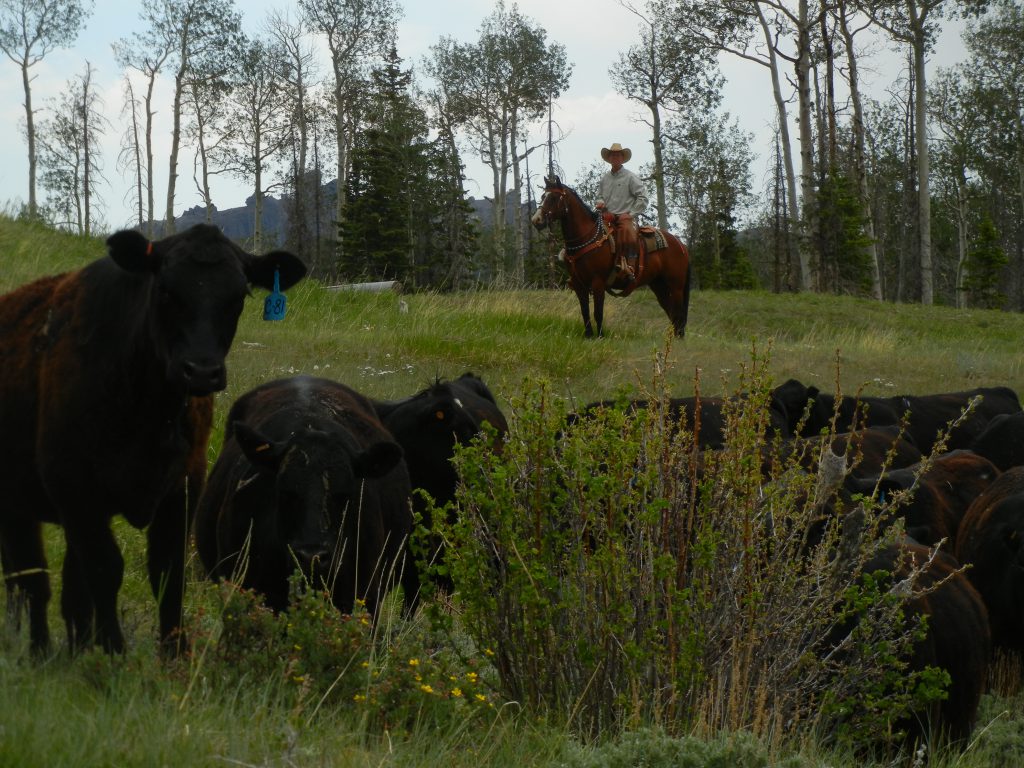 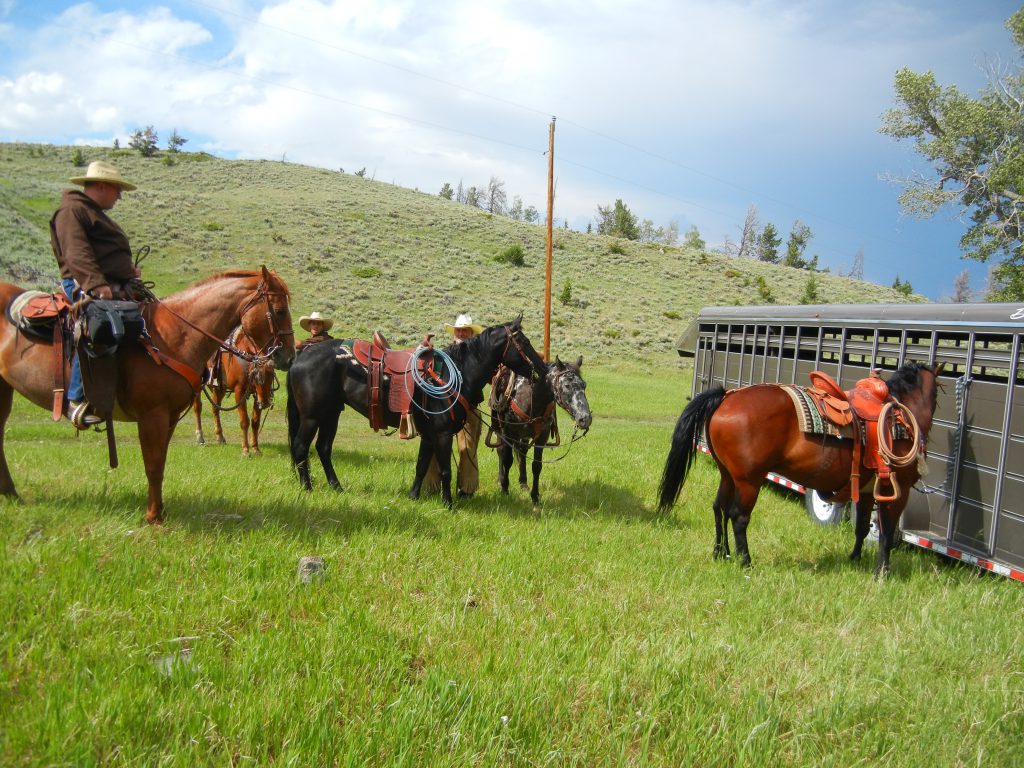 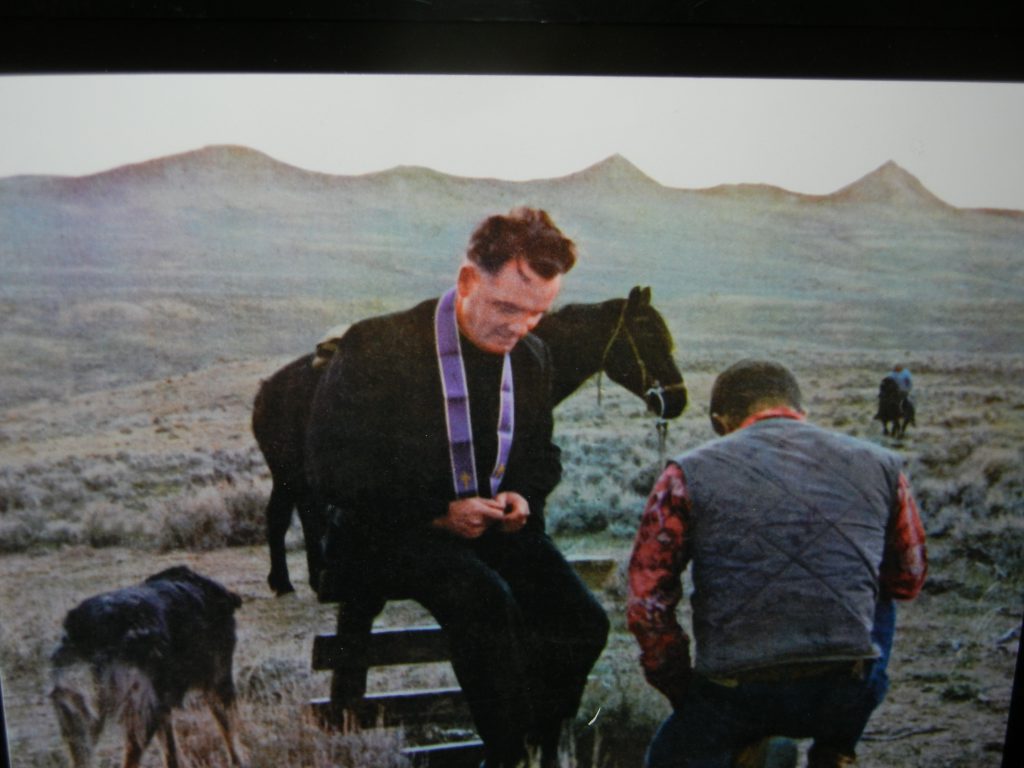 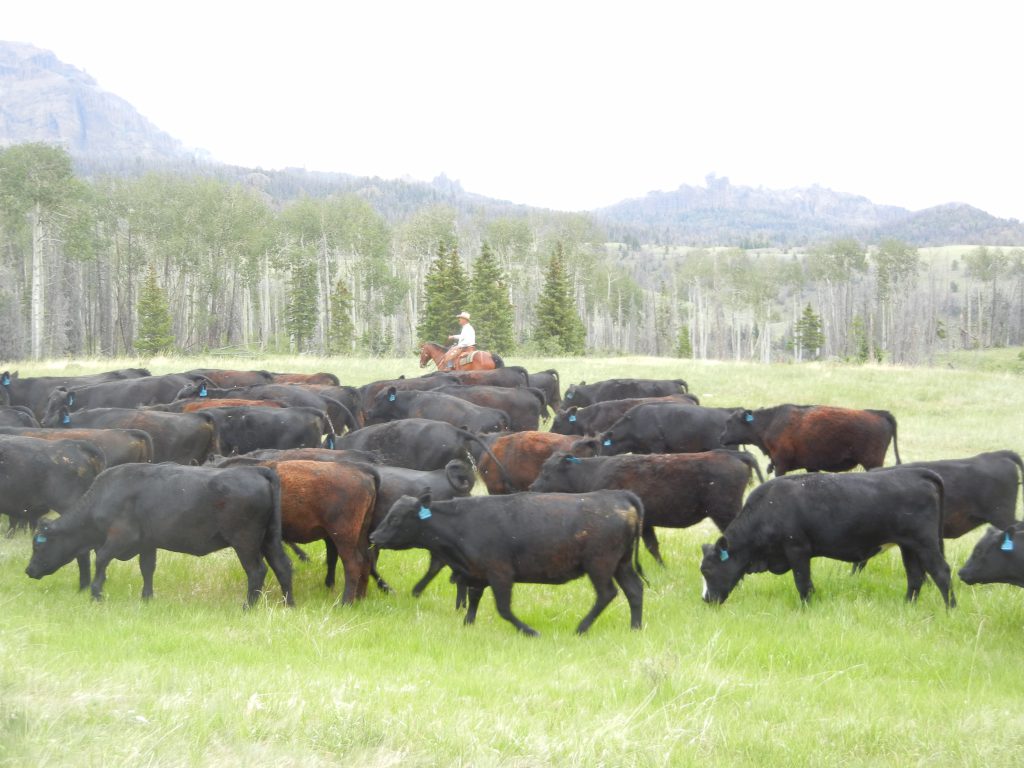