Another Confirmation Season In The Books

Published by Archbishop Etienne on May 10, 2013 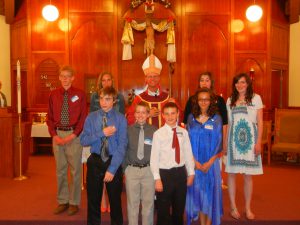 Wednesday evening in Kemmerer concluded this year’s Confirmation season.  Pentecost Sunday I will Confirm a group of adults here in Cheyenne, but this year’s travel season is now complete.  Eight young people were confirmed at St. Patrick’s Wednesday evening.

A special thanks goes to my good friend, Mark Seabrook, who was a tremendous help to me during this final eight day visit around the state.  It was a tremendous relief to have someone do the driving, as well as make sure nothing was left behind from one stop after another.

I am particularly grateful to all the men and women, mostly volunteers, who serve as catechists.  One of the greatest responsibilities of the Church is to pass on the faith from one generation to the next, and without such dedicated catechists, this would not happen.  A special thanks also to all the parents who fulfill their responsibility to raise their children in the faith.  I pray all of our families rededicate themselves to an active participation in the sacramental life of the Church.

I will close this entry, which closes this Confirmation Season with a quote from Pope Leo XIII.  This is from his 1890 encyclical Sapientiae Christianae, On the Duties of Christians as Citizens, and captures well the challenge that is ours today to promote and live the faith: