John The Baptist, Elizabeth & Zechariah Allowed God’s Plan To Interrupt Their Own

Published by Archbishop Etienne on June 24, 2018 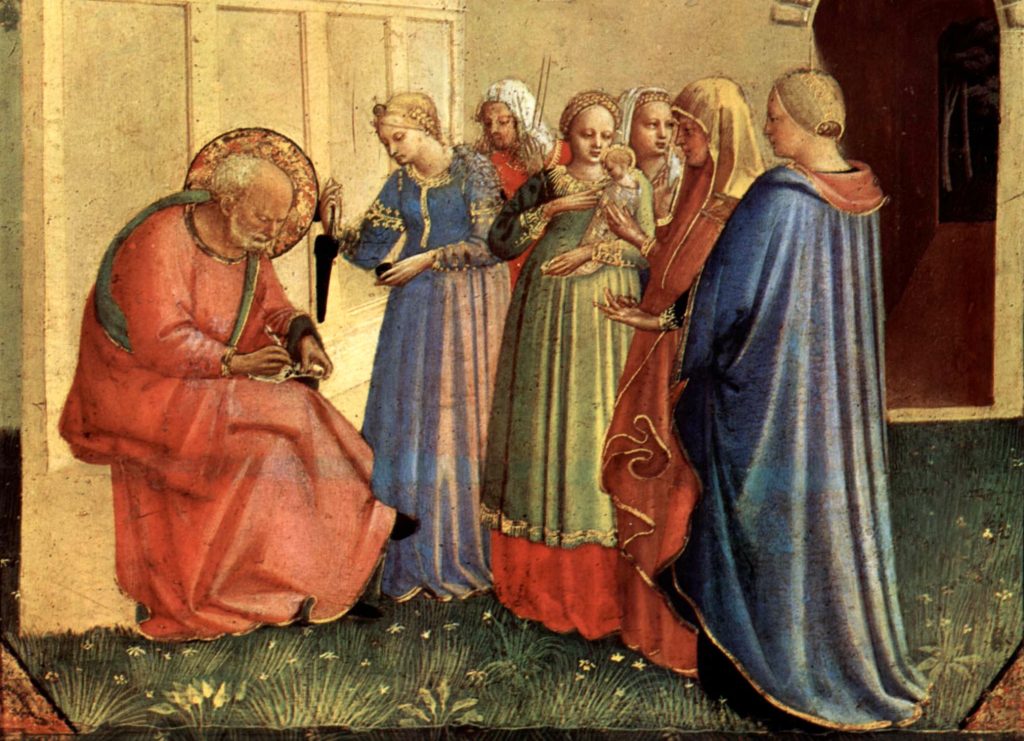 Fra Angelico’s The Naming of John the Baptist

On this Nativity of John The Baptist, we look to a critical moment in the history of salvation.  On this solemnity, our minds are drawn as much to the holy couples of Elizabeth and Zechariah & Joseph and Mary as they are to John the Baptist.

This is a seminal moment in history when God is choosing through the lives of ‘ordinary couples’ to bring his Son into the world, as well as the one who would go before him to prepare His way, to Baptize Him and proclaim Him the Lamb of God.

As central as these families are in the plan of salvation, today’s solemnity invites each of us to see our life and our families also as ‘players’ in this unfolding history of salvation.  Do we each day realize God’s plan? or are we too caught up in our worldly demands and pursuits to imagine that God can and does have meaningful roles for us to play in salvation history?

As we explore the manner in which God broke into the life and reality of the couple, Zechariah and Elizabeth, it invites each of us to ask: “How open am I to the will of God, particularly when it interrupts my own plans and expectations?”

Zechariah and Elizabeth were an elderly couple, barren up until this point of life. When God made known to Zechariah that he and Elizabeth would have a son, he was incredulous, and for his lack of faith, God made him mute until the promised son was born. Elizabeth we are told rejoiced to welcome this child.  Either way, God’s will was breaking into their lives and upsetting the ‘norms.’

Other evidence that God’s plan entails breaking us out of our ‘neat little lives’ comes at the time Zechariah is named.  When Elizabeth says “He will be called John.” the people reject this, because there is no such name in the family tradition. With that, they turn to Zechariah to ask him the name of the child, to which Zechariah declares in writing: “John is his name.” only to then recover his voice and sing God’s praise.  Notice, at this, “fear came upon all their neighbors, and all these matters were discussed throughout the hill country of Judea.”

God’s will often invokes new directions in the life of individuals and families.  Such changes of course create fear and anxiety if we are too dependent upon our own plans.  Many lives today are planned down to the finest detail, and often do not allow for, let alone rely upon the will of God.  Lives today are wrapped up in pursuing worldly dreams, or simply providing for the basic necessities of life.  We like to have everything neatly wrapped up in a framework that reduces stress and anxiety so we know what to expect each moment of every day.  God does not allow for such comfort, but rather wants us to look to Him to provide the path and whatever is necessary to sustain us along the way.

What the Prophet Isaiah knew of himself is true for each of us: “The Lord called me from birth, from my mother’s womb he gave me my name.” John the Baptist also knew this truth, and lived his life in complete conformity with God’s plan, despite the cost. today’s solemnity invites us to a closer communion with our Creator, and a greater fidelity to integrating God’s will into every aspect of our lives.

Here are two examples of just how much in today’s world neatly planned lives exclude God’s will, and thus prevent us from playing our part in salvation history. Take again the example of Zechariah and Elizabeth, who opened themselves to the demands of God’s will.  There are probably few things that create as much anxiety in the life of a couple as the news of having conceived a child.

How many couples get married today already having decided how many children they will have? How many decide they do not even want children? Or, sadly, how many couples when they conceive a child decide it is ‘inconvenient’ and do not accept this gift of new life? Without judging any of those particular situations, I simply beg the questions: Can we not be more open to God? to God’s plan? Do we have the faith and love to accept God’s will in our lives, even when it ‘blows up’ our plans and trust that God’s plan is better than our own?

Just as Zechariah and Elizabeth, each of us has a part to play in the Kingdom of God.

Through the intercession of John the Baptist and his parents, Zechariah and Elizabeth, we beg the Lord for the grace to open our eyes, our hearts and our lives to the mystery of God. May God who formed each of us and called us from our mother’s wombs be the same God who directs each day of our lives.  May the God who named us in the womb be the same God who defines us in this life; and may our life, rooted and directed in God be a source of grace and light to others.