Published by Archbishop Etienne on August 18, 2015 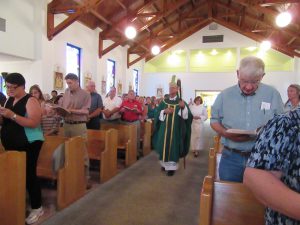 On Sunday, I joined the parishioners of Our Lady of Fatima for their 60th anniversary celebration.  Joining the parishioners for the celebration were their pastor, Fr. Thomas George, Deacon Ed McCarthy, and Msgr. James O’Neil, Fr. Michael Carr, Fr. John Savio, and the previous pastor, Fr. Bob Fox, who also served as the homilist for the 11:30 Mass.

Parishes play such a crucial role in the life of the Church.  From the very early days of the apostolic church, people gathered in homes to keep Jesus’ instruction to celebrate the Eucharist: “Do this in memory of me.”  In baptism, Jesus shares His life with every believer, and through the other sacraments, especially the Eucharist, Jesus nourishes His life within us.  Faith in Jesus is a gift, and it is expressed in the midst of the community of believers.  The Church is also the “Body of Christ” and just as Christ nourishes His life in us through the Church, so the members of the Church sustain one another in faith.  We need the Church, and the Church needs each of us.

In attending such celebrations, it becomes readily apparent just how proud people are of their parish, and their accomplishments.  Everyone wants to share a story or memory.  Sunday was no different.

The present church structure first served as a nondenominational church at the former Army Air Force base in Casper.  The base was opened during World War II as a training center for bomber pilots and their crews.  After the War, the base eventually became the Natrona County International Airport, and the church structure was sold to the Catholic Church.  In January, 1953 the church was moved to its present location.  Our Lady of Fatima served as a Mission of St. Anthony parish in Casper, until formally being established as a parish in September, 1954.

Following Sunday’s Mass, everyone gathered outside for a meal and entertainment.  A large tent was set up in the lawn.  A caterer provided pork and chicken, along with some barbecue, and parishioners provided all the other entrees and desserts. There were a few brief presentations, music, and lots of visiting.   Every parish needs to attentively and actively build community, and gatherings such as this are a marvelous way to bring people together to celebrate faith, and further strengthen the bonds that unite us.

Congratulations to all the parishioners of Our Lady of Fatima for your first 60 years of faith!