Published by Archbishop Etienne on July 7, 2013

Even though roughly two thirds of our youth pilgrimage group continue touring in Italy, I’ve returned home with the other group. We arrived back in Cheyenne around 7:00 yesterday evening. 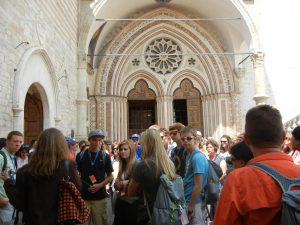 Group prepares for a tour of the interior and artworks of the Basilica of St. Francis in Assisi

The tour arrived in Rome late in the day, Friday, June 28.  Our first full day was in Assisi, visiting the sights of St. Francis and St. Clair.  Each day we celebrated Mass, prayed morning and evening prayer from the Liturgy of the Hours, and had a catechesis to reflect more deeply upon our faith and the teachings of the Church.

Some of the catechesis topics included the Universal Call to Holiness, Christ and His Church are One, Apostolic Succession, Sacraments, Communion of Saints, Conscience and Thinking with the Church. 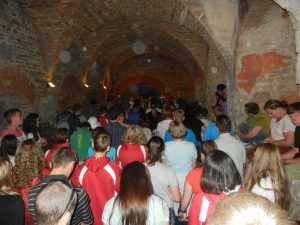 Mass in the catacombs of St. Priscilla

Our time in Rome included many stops.  I am very impressed with the group that made the pilgrimage.  They arose early every day, and were marched all over Rome.  We had a local art expert, Ms. Liz Lev give us a walking tour and description of some great art, including the artwork of Caravaggio and many others.  Tours also included the Colosseum and forum, and my favorite, the Scavi tour of the excavations beneath St. Peters.

We visited the rooms of St. Ignatius of Loyola, the burial place of St. Philip Neri, St. Robert Bellarmine as well as the tombs of other Apostles, such as Sts. Philip and James and St. Bartholomew.  We spent a morning at the Catacombs of St. Priscilla and had dinner at a lovely place along the Appia Antica, across the street from the Catacombs of St. Sebastian. 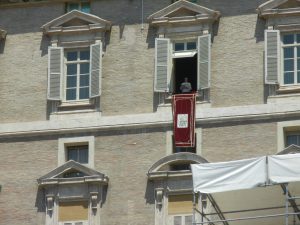 As one can only imagine, a highlight for most pilgrimages to Rome is the opportunity to be in the presence of the Successor of St. Peter.

Sunday, after Mass at the North American College, we made our way to St. Peter’s Square for the Noon Angelus with Pope Francis.  Once again, the entire square was packed, extending well into the city of Rome along the Via Conciliatione.

We saw some of the great sculptures of Michelangelo, including his Pieta at St. Peter and Moses in the Church of St. Peter in Chains.  One cannot begin to list all the other works of art discovered in the many streets and churches included in the pilgrimage.

The group quickly learned that Rome is a living catechesis in the faith, and a standing history of architecture.  The Church of San Clemente is just one example of how modern day churches are built upon the remains of others, dating back well into the first century and beyond.  Within the arch of this church is perhaps one of the most well known mosaics of Rome. 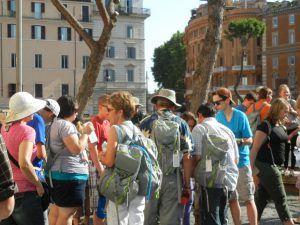 The weather that greeted us was quite mild, but eventually lived up to the typical Roman heat and humidity.  The pilgrims quickly learned they did not need to waste their money buying water, but could benefit from the many water fountains around the city that carry fresh, cool water from the Albani region.  We made plenty of stops to rest and refresh at these fountains.

My fervent prayer during the pilgrimage was that the Lord would touch each member of our group with the particular grace they are most in need of.  I prayed that it would be a moment to grow in faith as we drew near to the Lord and the many others who have lived such holy lives in service to Christ and His Church.

I prayed also for the People of the Diocese of Cheyenne, that all of us would be drawn to a more singular devotion to the Lord.  I experienced many blessings from the visit.  Not only was I blessed to be in the presence of our youth for such an extended period, but I was renewed in my own faith, and granted clarity regarding my role as your bishop.

Despite the many beautiful works of art that graced our trip, there is nothing more pleasing in the sight of God than individuals who are living their life fully and freely according to His will and purpose. 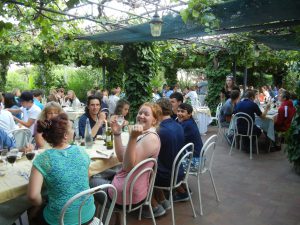 Our final evening in Rome we went out a way beyond the city wall to a lovely place known as Cecillia Metella.  This is not far from a chapel known as Domine, Quo Vadis.  Legend has it that St. Peter, discouraged from his time in Rome, was walking along the Appia Anticha, leaving, when he crossed paths with Christ, who was walking in to Rome.  Thus, the name of the chapel in Latin, representing the questioned posed by Peter to Christ: “Lord, where are you going?”

The Lord’s response: “I am going to Rome to be crucified again, since you are leaving.”  Thus, Peter knew that he was to return to Rome for his ultimate confession of faith that Christ is the Son of God.”  (Matthew 16:16-19)

This, in short, was what our pilgrimage was all about, growing in our faith that Jesus is the Son of God. 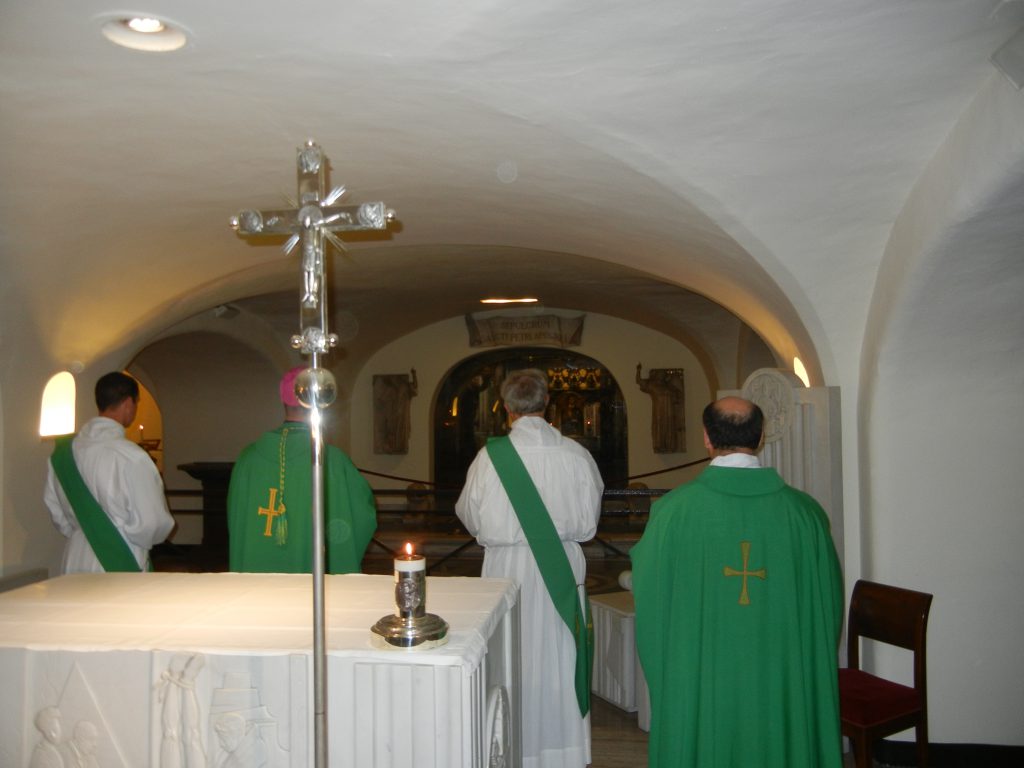